<p> That&#39;s what some guy said to me late last night as I waited for my tacos at a typically busy taco truck. He was talking about our Los Angeles neighborhood, Echo Park, which was recently named by the American Planning Association as one of the &quot;<a href="http://www.planning.org/greatplaces/index.htm" target="_blank" title="APA's Great Neighborhoods List">10 Great Neighborhoods of 2008</a>&quot;. It&#39;s a nice honor for the &#39;hood -- and I think they&#39;re right -- but I&#39;m with that random taco dude: don&#39;t tell my landlord.<br />

That's what some guy said to me late last night as I waited for my tacos at a typically busy taco truck. He was talking about our Los Angeles neighborhood, Echo Park, which was recently named by the American Planning Association as one of the "10 Great Neighborhoods of 2008". It's a nice honor for the 'hood -- and I think they're right -- but I'm with that random taco dude: don't tell my landlord.

I've lived in Echo Park for just over a year, and while I'm relatively new there, I've gotten pretty familiar with its pros and cons. Walkability, access to good and services, proximity to open spaces, access to transit, and a diverse population are some of the best aspects of this neighborhood, and many of these are cited in APA's commendation. One of the bad parts is rent. 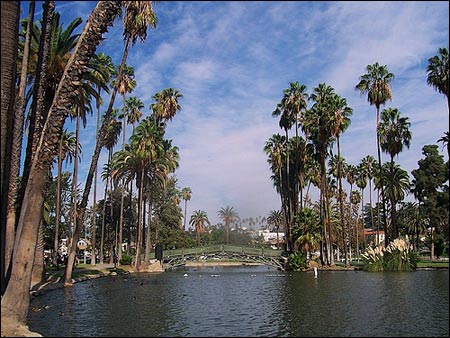 As much as I'd like to keep this a secret, the word's gonna get around. I hope my landlord doesn't find out, but he probably will.

Rising rents seem to be inevitable in this city, and nearly any other. But now this nice bit of PR is likely to push Echo Park's rents even higher. What's likely to result is increased gentrification of the neighborhood, which is a threat to the area's incredible diversity. Of course, every neighborhood evolves, but these types of top lists tend to speed up the process. Just ask a Portlander.

Along with communal showers and bathrooms, the village will also include laundry, storage facilities, and offices for social service providers.

The city of L.A.'s poets write about their neighborhoods.