Rolling Out A New Park, Literally!

In many urban areas around the country, public parks are in short supply. Yet these same places often have an abundance of space for sitting cars. This bitter irony -- or potential opportunity depending on your perspective -- is the inspiration behind the Trust for Public Land'sNational Park(ing) Day.

On Friday, September 21st, TPL and its local partners will be transforming metered parking spots around the country into public parks -– if only for a few hours. With conversions scheduled for over 35 cities across the United States -– including New York City, Boston, Minneapolis, Washington DC, Seattle, San Francisco and Los Angeles -– the organizers plan to focus attention on the need for more parks while encouraging people to rethinking how urban space is used.

This innovative parking-to-parks concept originated in 2005 with Rebar, a San Francisco-based art collective that successfully created a temporary public park. The effort briefly expanded the amount of green space in the city (at least until the meter ran out), and attracted the attention of TPL, which helped create the first National Park(ing) Day last September. This year's effort has grown even larger, with some cities even having multiple locations (comprising a whole system of park(ing) parks). 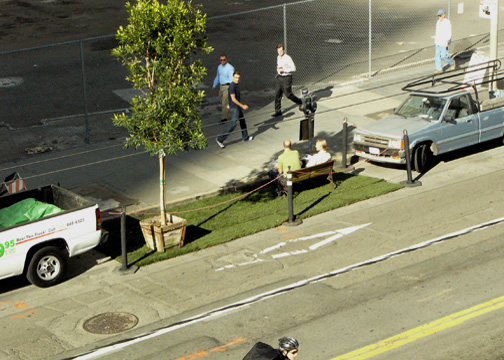 Los Angelesis one city that will be host to multiple temporary parks – with artists, community activists, non-profit organizations and design professionals involved in various efforts around town. Installations will range from the basic –- a layer of sod, a bench, and a few potted trees –- to the elaborate, with teams of professional landscape architects competing to see who can create the best temporary park. In true Hollywood fashion, organizers in the city are even throwing an after party following the day's events where they will recreate some of the day's installations at a new parking lot. Feet and bicycles -- not limousines -- are likely to be the transportation of choice. 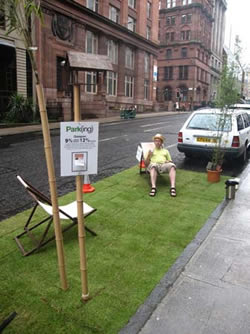 In Atlanta, local non-profit Park Prideis partnering with TPL to create a temporary park around Tech Square, at the corner of Spring Street and Fifth Street, in mid-town Atlanta. Among the 25 largest cities in the U.S., none has a smaller percentage of its land dedicated to parks than Atlanta, and half of Atlanta residents do not live within walking distance of a park. To help increase awareness among local residents, Park Pride chose a busy location -- part of a newer addition to the Georgia Tech campus bordered by businesses, tourist attractions and even Atlanta's primary Interstate highway. Mindful of Georgia's drought, the group chose to use Astroturf, along with some seating and potted plants, for this socio-environmental awareness experiment. Nonetheless, organizers believe the short lived park will compel pedestrians and motorists to recognize the contrast between the grey asphalt and (mostly alive) green space, however ephemeral its presence.

Incorporating climate change in its installation is the Kentucky Chapter of the ALSA, which is planning to use digital thermometers to demonstrate the cooling properties their park has on the urban heat island effect. Meanwhile in Miami, the Wynwood Art District's solar-powered Park(ing) park will feature art pieces inspired by nature and made from sustainable, eco-friendly materials.

Ultimately, all of the efforts are designed to highlight the need to integrate accessible and functional parks and green spaces into urban environments and lifestyles –- and hopefully prompt passersby to seek opportunities to roll up their sleeves and roll out the green themselves. Isn't that worth a few quarters and a little inconvenience on the part of some motorists?

Learn about Park(ing) Day events near you

Nandita Godbole contributed to this article.