Amid pandemic and protest, the need for urban mending has become abundantly clear, with responses that invoke the more ethereal elements of a physical place I like to call it "place-healing," a term that seems right for the times.
Charles R. Wolfe | @crwolfelaw | September 8, 2020, 9am PDT
Share Tweet LinkedIn Email Comments
Place Healing Afoot in Richmond, Greater London.
Chuck Wolfe

Just for a moment, return with me to only a few months ago. Most everywhere, the need for urban retrofits and recalibration to avoid disease spread was already challenging enough. Then, of course, came civil unrest in Minneapolis, Atlanta, Seattle, Portland, and more; coronavirus was joined by the urban impacts of an insidious racial injustice—what many termed a second pandemic that became more complex as the summer went on.

Across the Atlantic, here in the United Kingdom, parallel responses unfolded. Slave trader statues from times gone by came under renewed scrutiny. In short, amid pandemic and protest, the need for mending has become abundantly clear most everywhere, with responses that invoke the more ethereal elements of a physical place.

To that end, and based on recent research and experience, I'd like to explore how we might sew together rifts between the past and what comes next, inspired by simple examples, right before our eyes. Cities and their stories already show evidence of how people can adapt and transition to something new. I like to call it "place-healing," a term that seems right for the times. 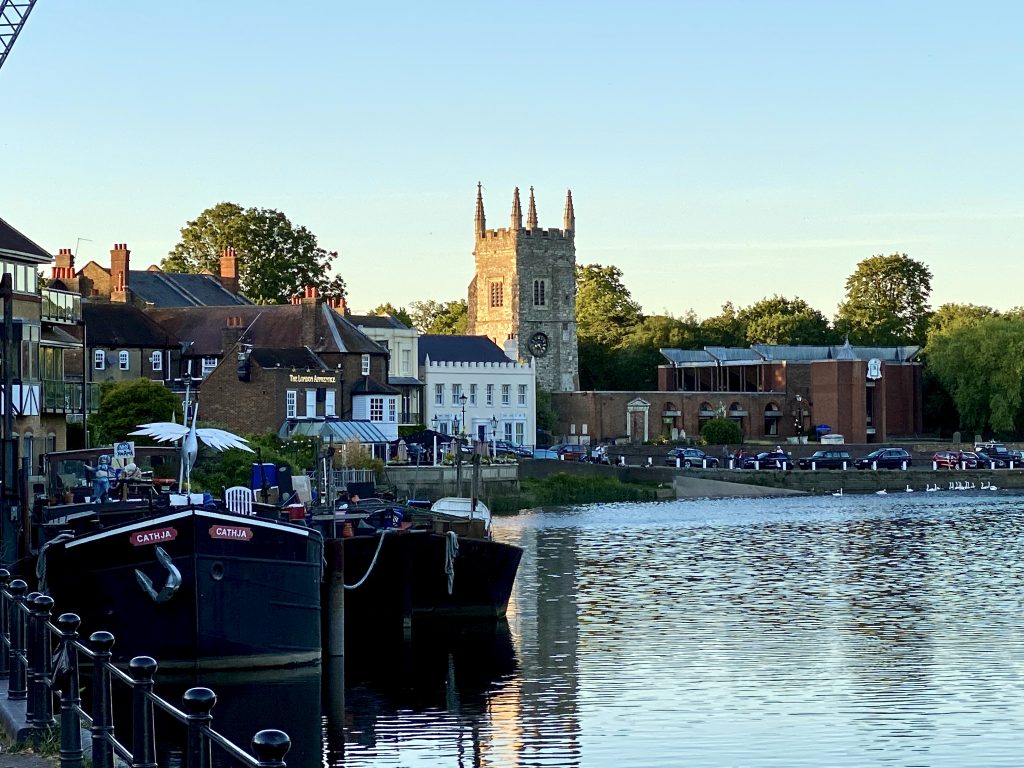 Place-healing has already shown itself through civic expression. In the United States, voluntary and spontaneous cleanup and damage repair followed in the wake of violent demonstrations in June. Then, in London, protesters crossed ideological lines to aid those injured. This type of place-healing is built on empathy and relatedness. It is a fundamental display of human potential to recover a sense of community, of the type that developed in the initial days of the well-publicized, now-disassembled Capitol Hill Autonomous Zone in Seattle.

In addition, inadvertent place-healing adaptations, however mundane, show how the appearance and experiences of urban places will transform. In cities such as London, diversity, and remnants from other eras define much of the urban landscape. A long and rich history allows continuity expressed, in an oddly comforting way. 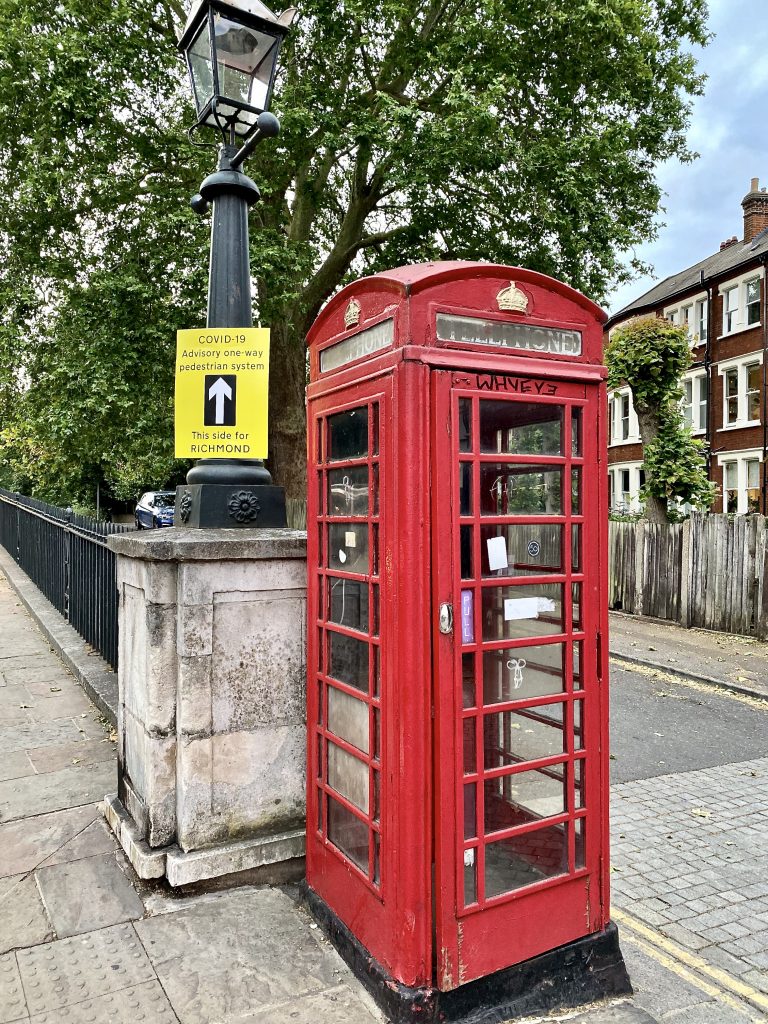 From phone booth to artifact.

In the photograph above, a red phone booth blends with a pandemic-based sidewalk retrofit. The colorful icon (actually an artifact no longer used) now shares the limelight with an emergency public health response. The phone booth and signage above may seem trivial. But this juxtaposition undergirds the new with the familiarity of the old, something that place healing requires and is already on display. 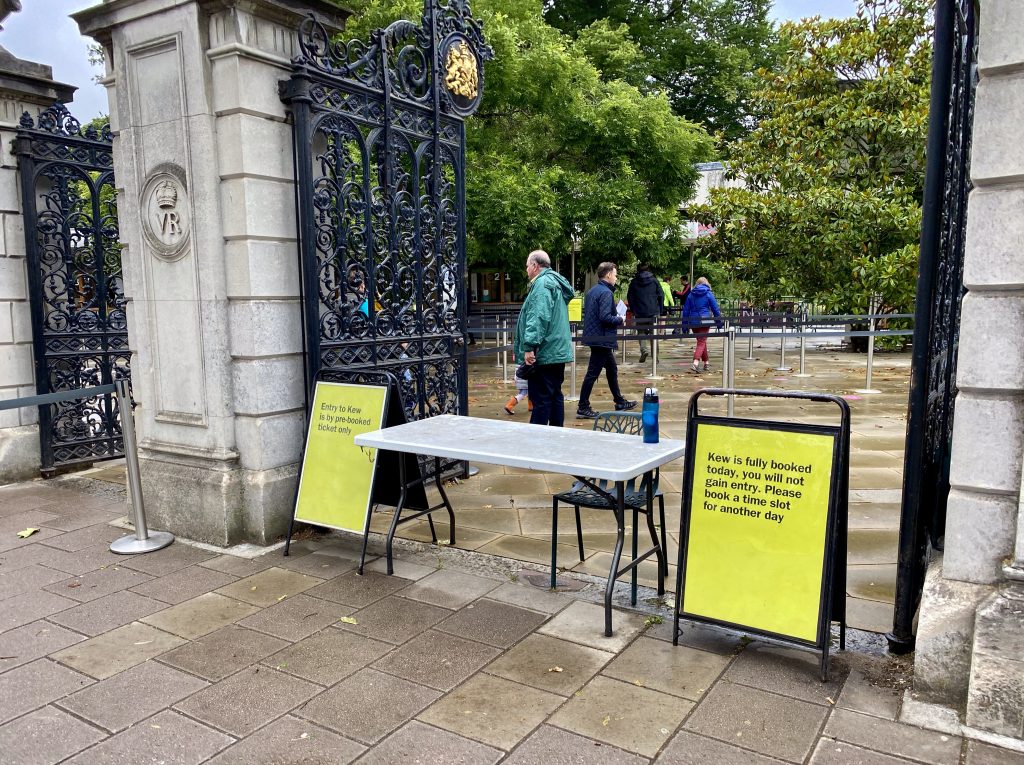 An adapted gate at Kew Gardens.

From fruit stall to delivery in lockdown.

Finally, institutions—even private businesses—may live on in a different form, because they honor an ethic necessary to place-healing: respect for he people involved. One example (further discussed in my pending book, Sustaining a City's Culture and Character) is London's Bobtail Fruit, once a fruit stall in Covent Garden named for the owner that transitioned to five brick-and-mortar outlets around the city, and more recently to a web-based delivery business of quality baskets of fruit, and milk.

According to my interviews, Bobtail's success over time is more about an intangible of place-healing—respect for customers and community service (such as the delivery of gifts at holiday time in neighborhoods where its stalls once stood). Significantly, during the COVID-19 pandemic, Bobtail was well-positioned to expand its delivery area, taking on more residential customers while its traditional office clientele worked from home.

Rail arch as business base.

In the Bobtail Fruit example, physical space no longer defines the sale process, now warehouse-based in a retrofitted rail-line arch, and subject to a wholesaler who supplies the fruit. But, a customer service imperative dating back to Covent Garden days remains key to the business, which has adapted to customer needs in a new form.

In summary, urban imagery showing adaptation, and Bobtail Fruit's people-centric approach suggest how to turn angst into action. Adaptation and blending will frame the next steps to something new. But we still need a salient recipe to get there.