What the Market Can Bear: Defining Limits to Inclusive Housing Requirements Many jurisdictions apply inclusivity policies that require developers to sell or rent a portion of units at prices that are affordable to low-income households. The profitable, market-priced units subsidize below-market housing.

These subsidies are considered a community contribution that developers pay for the privilege of doing business in an area. Where land prices are escalating due to market trends or public improvements such as a new transit station or upzoning, affordability mandates can capture some of the profit that would otherwise go to property owners and developers, an economic transfer from wealthy to poor households.

Research indicates that inclusionary policies can increase affordable housing supply and social integration, but if applied to less profitable projects they may reduce desirable development, particularly moderate-priced housing. As a result, affordability mandates must be carefully designed to avoid causing unintended harms.

For example, in my city of Victoria, Canada, a 10-15% inclusivity target [pdf] was recently proposed, but one council member suggested increasing this to 30%. Would tripling the requirement triple the number of affordable units? Almost certainly not.

A key factor is the ratio of profit-generating to subsidy-requiring units. For example, if a unit costs $350,000 to build but must be sold for $150,000, it requires a $200,000 subsidy. With a 10% inclusivity requirement, the nine market-rate units bear a $22,222 cost, but with a 30% requirement, each of seven market-rate units bears an $85,714 cost, nearly four times higher, because a larger subsidy must be borne by fewer market-priced units. A moderate-priced unit might be profitable with an additional $22,000 cost burden, but not with an $85,714 burden, so developers will build fewer of them.

As the inclusivity mandate increases, total housing production declines, consisting primarily of reductions in moderate-priced housing that is initially affordable to middle-income households, and becomes affordable to lower-income households as it depreciates in the future, a process called filtering. The graph below illustrates these impacts. 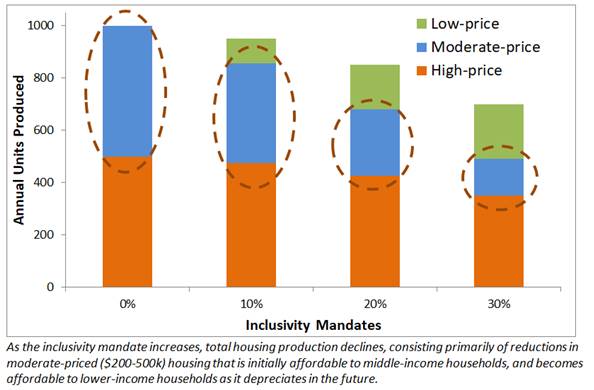 In this case, tripling the inclusivity requirement adds 115 low-priced housing units, but reduces total housing production by 300 units of which 240 are moderate-priced. Does this increase or reduce affordability overall? This depends on how affordability is defined. It sometimes refers to subsidized housing built specifically for low-income households (typically, the lowest income quintile), but a broader definition recognizes that many middle-income households (second and third income quintile) pay more than is considered affordable (30% of income for housing or 45% for housing and transportation combined). Increasing affordability mandates tends to increase the supply of housing that meets the first definition but reduces supply that meets the second definition, and because housing tends to become more affordable over time, it reduces future affordable housing supply by both definitions.

Let me describe a specific example that illustrates these effects. A few years ago a local developer proposed the Bohemia and Castana, a pair of three- and four-storey mixed-use buildings with 71 residential units, a third of which were to be moderate-price rentals. Neighborhood residents objected. They considered the buildings too big and tall, although critics could never explain exactly how a fourth storey would harm them. Never-the-less, the opponents were successful: the City rejected the proposal. The developer instead constructed a three-storey building with 51 condominiums but no rental units. In a city with nearly 50,000 houses, 20 fewer moderate-priced units is too small to notice, but if this is typical, it indicates that development restrictions typically reduce moderate-priced infill housing development by about 30% compared with what the market would deliver. 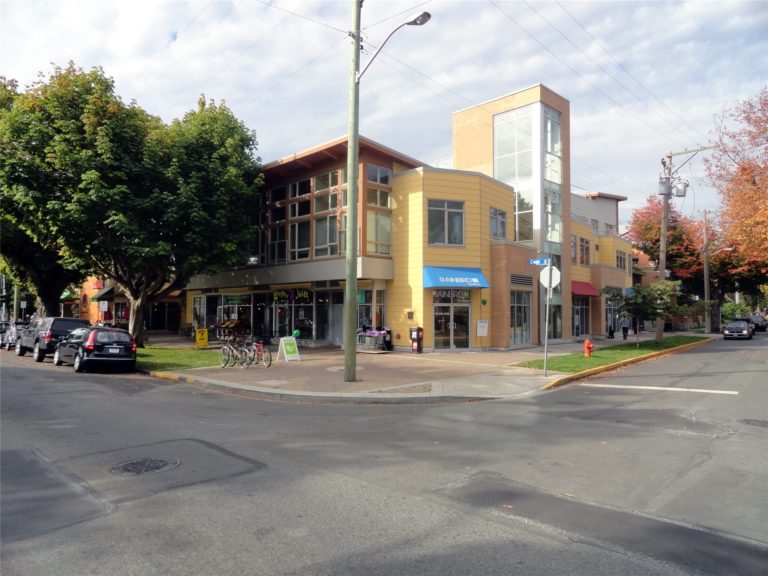 Although the magnitude of these impacts will vary depending on conditions, these effects are likely to occur in most situations, particularly where moderate-priced housing is less profitable. This suggests that higher inclusivity requirements may be suitable where there is very strong demand for new housing, so developers will build as many units as allowed even if some sell at a loss, but softer markets with lower profits and higher risks require lower requirements or exclusions for moderate-priced units to maximize overall affordability.

In a typical situation, the owner of a half-acre lot occupied by one old house could replace it with one more expensive house or with several townhouses or a small apartment building. For overall affordability sake, the best option is to build as many moderate-priced townhouses or apartment units as possible. Imposing density limits or adding a 10-30% affordability mandate will discourage projects that add supply, resulting in single-family houses being replaced by expensive single-family houses rather than moderate-priced multifamily.
The table below summarizes the distribution of these impacts.

Who Benefits or is Harmed by Inclusivity Mandates

Although inclusivity requirements may be appropriate in some situations, to maximize total benefits they should:

Todd Litman (2016), Affordable-Accessible Housing in a Dynamic City: Why and How To Support Development of More Affordable Housing In Accessible Locations, Victoria Transport Policy Institute.

National Housing Conference is dedicated to ensuring safe, decent and affordable housing for all in America. It includes information on inclusivity policies.