The report starts with an insightful overview of social equity concepts, including the distinction between equality (treating everybody the same) and equity (responding to people's different needs and abilities), and how these concepts can apply to transportation planning. 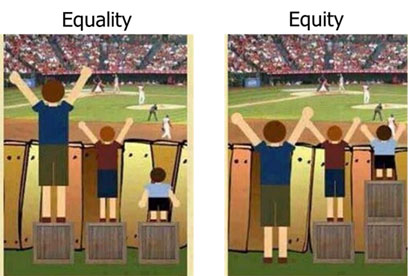 The report concludes that pedestrian and bicycle improvements can help reduce transportation inequities. It identifies specific, practical ways to make pedestrian and bicycle planning more responsive to underserved population travel demands, including specific objectives to support social equity goals, new tools for understanding how walking and cycling conditions affect disadvantaged populations' access (such as the number of jobs accessible to disadvantaged groups within an acceptable commute travel time, and how planning decisions would affect this), and more involvement of underserved populations in the planning process. The report also includes examples and case studies of pedestrian and bicycle planning that applies advanced equity analysis.

Monday, August 1, 2016 in Pursuing Equity in Pedestrian and Bicycle Planning

The city wants to cut its car use in half by 2030 as part of an aggressive set of "aspirational" goals.

The economic and health effects of coronavirus have spread unevenly across racial lines in the United States, as further revealed by new research from the Pew Research Center.