Trends from the APA 2014 Conference The APA Conference in Atlanta had a lot to offer! This is the fourth year that I, @evanscowley, have analyzed the tweets from the APA National Conference (see the analysis of the 2013 conference and 2012 conference  with  @b_kubinski, and 2011 conference with @cubitplanning). I looked at what topics have continued to trend and new emerging topics. Using the official hashtag #APA14, I collected and analyzed what planners talked about at the conference, excluding event announcements. The attendees at APA were active tweeting throughout the conference generating 9,389 tweets from more than 1,000 people (more than 20% of those attending the conference).  The number of tweets almost doubled from the 5,083 in 2013. Most were attending the conference, but several were following along from a distance. Of the more than 5,000 people attending 25 percent were tweeting, up from the 21 percent tweeting last year.

There were lots of fun pictures shared at the conference. The most frequently shared image was an infographic of savings to the economy by reducing car ownership,  posted by @urbandata. Another popular image shared is of the mismatch between the expenditures on healthy behavior and the determinanets of health, from the New England Healthcare Institute and shared by @ctdata. We also shared videos, such as Google Self-Driving Car driving on city streets. 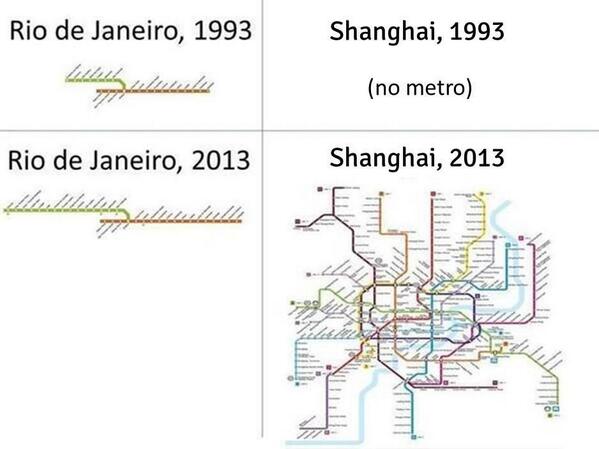 I found particularly fascinating the change in Shanghai’s metro system between 1993 and 2013.

There were several topics that were greatly discussed. Below are the 25 most retweeted tweets of the conference (excluding retweets about announcing an event or session). For Twitter newbies, retweeting is like forwarding an email to people you know. RT @evanscowley means that you are forwarding a Tweet from a user, in this example me. Forty percent of the total #APA14 tweets were retweets (so interesting that someone decided to forward it on).This year was all about healthy communities, demographic change from millenials to boomers, and active transportation.

The Meaning of Our Tweets

Sentiment analysis helps us to understand the meaning conveyed in a large group of tweets. To learn more about sentiment analysis I have a publicly available article on the topic. What are the sentiments that planners are expressing when tweeting about the conference? Are we angry, happy, or something totally different? We found that we are a positive bunch, with a sentiment score of 77 expressing positive sentiment.

Conference attendees did a great job sharing links to all kinds of content. The volume of links was overwhelming, so below are the 25 most retweeted links.

So are there any urban planning trends that surprised–either by being here or by not being here? What were the trends at the APA 2014 conference not captured by Twitter? Let me know in the comments.

My takeaway from the use of Twitter at the conference is that a significant number of people were able to use this medium to share and engage in conversations around planning topics that resonate with them. It provided a platform to engage in social conversations that helped people meet each other both on and off line. What more could we ask for from social media in a conference? I look forward to even more participation at the 2015 conference in Seattle.

The APA's flagship program is back with its 2015 iteration—celebrating the best neighborhoods, public spaces, and streets in the United States.

Trends from the APA 2015 Conference