Why Definitions Are Less Important than Discussions

To be pedantic, or to participate, is the question. Few examples compare to planning in unlocking the potential of words to influence events. The power of the planning language ranges from intensely personal to global in scale. The word “mitigate,” for instance, could have implications for your back yard, an entire state’s drinking supply, or the world’s climate.

Given the stakes, the jargon and buzzwords and legal terms and hot buttons of the planning conversation are in constant need of re-evaluation. To paraphrase the American poet Ezra Pound: we must act as custodians of the language. But raising the level of the planning conversation will not always be about perfecting and solidifying definitions like Pound might have wanted. Sometimes, we have to let words stay slippery.

Take the meaning of the word “planning” as an example. Even within bureaucratic parameters, planning has many possible meanings. Certainly, “planning” means something different whether you’re a politician, a member of the public, or a professional planner. To any among those ranks, planning could signify an essential check and balance on market forces, a creative activity, or a nuisance to personal liberty. Just among professionals, planning means something different if you’re working the public counter than if you’re drafting long range plans.

Despite the slippage in what it means to plan, the concepts organized by the practice of planning are more prominent than ever in the consciousness of the public. Planning, and its constellation of participants—consultants, advocates, John and Jane Q, and bureaucrats—have made great strides in bringing the language of planning into the lexicon of the masses, hence the proliferation of niche websites providing a forum for discussions about the future of cities. Even better: more and more often, people are taking ownership of positive, productive change—willing to rethink the status quo and make positive assertions about the forms and structures of their communities.

Here I propose, however, that one threat to the ongoing productivity of a civic-minded planning conversation is a tendency toward pedantry—a militant adherence to specific usages.

I don’t mean to disregard the fact that when implemented systematically, attention to the meaning of a word can have powerful effect. Sometimes, exploring the meaning of the terms of planning can reveal undiscovered or unacknowledged aspects of a concept, like the recent exploration of the term “walkability” by John Lavey and Jennifer Hill on the Community Builders website, or like I just did with the word planning above.

Too frequently, however, holding others accountable to specific political valences creates a distraction. The recent antipathy toward the word “accident” provides a useful example of how dealing in semantics can become a double-edged sword: When the leader of a large city’s police force or the leader of an entire city enacts policies requiring the use of the term “collision” to better describe the serious and preventable nature of an event described, the gesture might indicate an evolution toward a safer, more civil society. 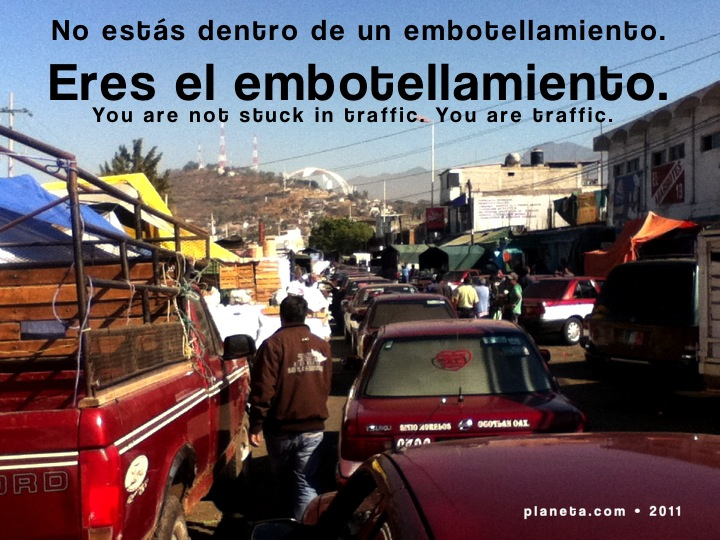 Playing on the meaning of words can be a powerful tool for rebranding, as exemplified by the ubiquitous “You are not stuck in traffic; you are traffic” slogan. (Image via Flickr. Credit: Ron Mader.)

However, if that same municipal leader, or anyone else, were then to turn around and berate a member of the public for using the term “accident,” it would be a setback for that worthy cause. It’s pedantic, and no one likes a pedant.

I suggest a different reaction when someone uses words that don’t conform to the nuances of a preferred political agenda—gratitude.

Every word provides a signpost, directing the participants in the conversation toward shared understanding. That is especially true of words open to multiple political interpretations. Think about what the word means to the person who is using it. Are they new to the discussion? Are they passionate about the subject and ready to get to work? Or have they just identified themselves, voluntarily or otherwise, as a political adversary? Did the use of that word announce the beginning of a mature political debate (i.e., not a semantic debate)?

Sometimes, the most important step in allowing a discussion to continue is to allow the use of a shorthand. Just as the term “walkability,” for instance, merely stands in for many larger concepts, all inadequately represented by a single term, so too are words like "accident" and "collision" representative of a powerful confluence of events and emotions. They both represent a tragic, all-too-common, preventable event.

Put one way, concern over the use of the politically correct term removes focus from the hard work of preventing accident/collisions in the future. Put another way, pausing to correct usage would be a patronizing distraction and not likely to ingratiate anyone to the cause.

It’s likely, however, that everyone in the room knows what both accident and collision mean, and both provoke a deeply emotional response, making them both functional examples of shorthand. How glorious that there are numerous productive avenues other than the pedantic to move the conversation along!

There’s a reason we became militant about the words of the planning language. Planning words express complex ideas worthy of focused thought and conversation, and we have the deepest possible connection to the ideas and places represented by them. However, we should value the ideas and places more than the words that stand in for them (just like, as William Shakespeare has implied, we value less the word rose, than we value the rose itself).

The communities in this country embody too great a diversity of values and ideas, not to mention typologies, for a language of constraint to be useful. The planning conversation requires a middle ground of mutual understanding made possible by flexible language—not a draconian adherence to a specific political vernacular.

An oil town in a red state proves we don't have to talk about climate change to adapt to it.

What it means when planners use their words.

'Define Each and Every Acronym'

A participant in some of Seattle's most consequential planning processes puts out a call for a more inclusive use of language.