As the housing market recovers, are we back to the McMansion-binges of the 2000s? Or, are we growing just a little bit smarter?

A few days ago the LA Times reported that, this October, residential construction permits topped one million for the first time in five years. That fits the narrative of a consistently improving housing market, but I wondered what was behind the numbers: were we back to the McMansion-binges of the 2000s, or were we growing just a little bit smarter?

With multi-family construction permits at a 27-year high (as a share of total residential permits), we're not doing half bad! In 2012, the last full year of data, multi-family residential construction permits accounted for the largest share of total permits issued since 1986. In 2012, 37.5% of new homes were multi-family units, yielding about 1.7 detached homes for every apartment or condo unit. That share reached its nadir in the early 1990s at under 17%—six single-family homes for every multi-family unit!—and held steady at around 25% until 2007: 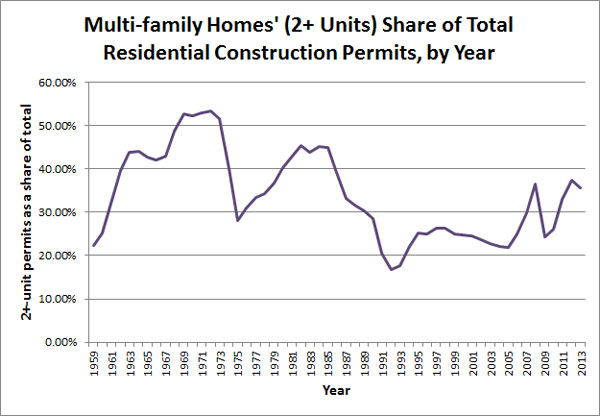 The hope, at this point, is that that little tail emerging in 2013 doesn't continue its descent. If we build too many single-family homes now, a time may come where current owners can't find buyers. As the National Association of Realtors found in their annual report, the sprawling, suburban model probably can't sustain itself if it continues to account for more than 2/3 of overall growth. Even that may be a stretch in the not too distant future.

Here's the data based on the absolute number of building permits issued, rather than ratios (these are divided between single-family and 5+ unit buildings): 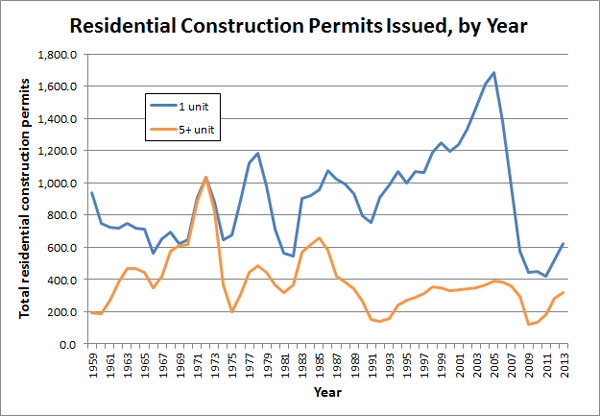 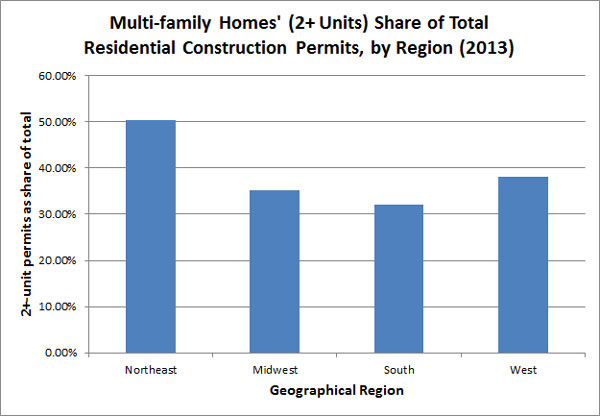 Here you can see that the Northeast is leading the way in the share of multi-family housing being built, with just about one detached home for every condo or apartment. The South is, not surprisingly, building a lot of single-family homes. Its rapid growth accounts for over half of residential building permits in the country, so it skews the nationwide ratio pretty strongly in that direction.

As a side note, it's interesting to look at how construction of 2-, 3-, and 4-unit construction has changed over the years. Since the late 1950s, these building types accounted for at least 6% of total construction, peaking in the early 1980s at over 10%. Since then they've been on a steady decline, falling to almost 3% in recent years. No love for the lowly duplex these days, even with the uptick in multi-family construction. 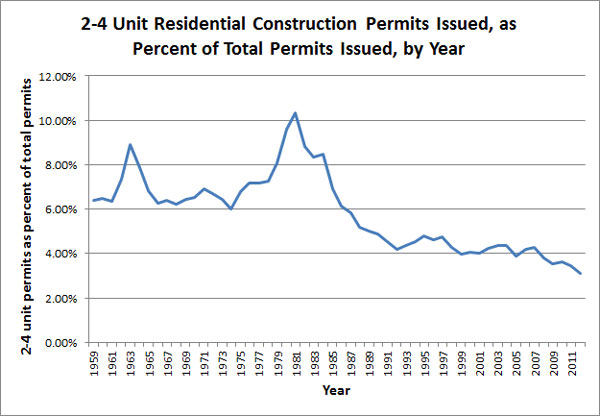 And for anyone interested in a graph comparing single-family units to bigger multi-family (5+ unit) buildings, here you go. It accentuates the peaks a bit, but otherwise retains the same general shape as the first graph: 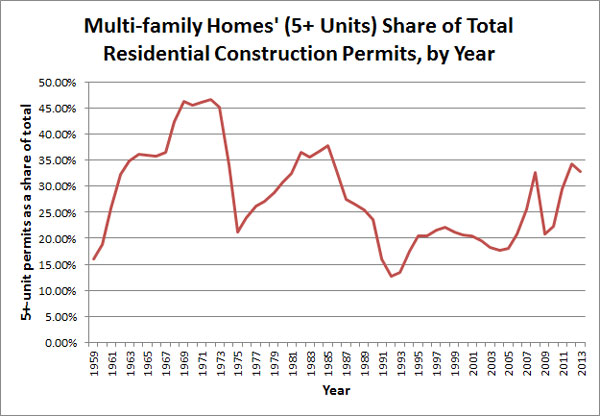 Big U.S. cities lost population as the pandemic loitered into its second year. Suburban cities in Idaho, Arizona, Texas, and Florida grew the fastest during that time.