New neighborhood-level data from the walkability rating website Walk Score has broadened the view of what it means to live in a walkable city.

Over the past few years, the website Walk Score has gained a lot of popularity amongst urban planners, developers and, maybe most especially, real estate agents. It's a mapping tool that quantifies the walkability of street addresses with a simple 0-100 score, based on proximity to a variety of amenities. It's an easy way to find a new place to live, or to navel-gaze and see just how well your address measures up.

It's also a good way to compare places. In 2008, the site released citywide Walk Scores for 40 cities, aggregating scores from addresses throughout cities to give average scores across entire urban areas. "Top 10" lists inevitably ensued. As with many of these sorts of lists, the value is mainly in the novelty, but these figures do well to illustrate how cities differ on a macro scale.

A new release of data has created scores for more than 2,500 cities in the U.S., and, most importantly, the scores of more than 6,000 neighborhoods within these cities. The site has released a number of "heat maps" that show, through a red-to-green color overlay, where the highest and lowest Walk Scores are within a city. The maps are pretty cool to look at, as are these side-by-side heat maps. 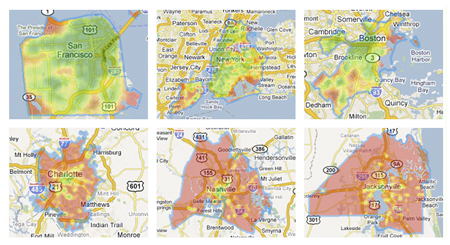 And, now, with all this additional data, let the Top 10 lists emerge yet again. I'll start, though I'm trying to get a slightly broader view. In the following tables and lists, I look at the 40 most populous cities in the U.S. (based on 2009 data from the U.S. Census Bureau), comparing both their citywide Walk Score averages and their neighborhood-level scores.

But before the listing begins, it must be stated that this data is by no means perfect. Not every neighborhood from every city is listed. Some cities have very few neighborhoods listed (Fresno, California, for example, has just four neighborhood Walk Scores) and others have more than 100 (San Antonio, Texas, has the most, with 230 listed). Also, three cities were divided by ZIP codes rather than neighborhoods. What defines a "neighborhood" is rather amorphous, so drawing clear comparisons between them across cities isn't exactly laboratory science. And Walk Score's method of assigning number scores is based on the proximity of amenities – another loose term that can be parks or elementary schools or bars. A bunch of bars might be desirable for some, but maybe less so for the parents of elementary school kids.

The data may be less than perfect, but for these purposes it offers a considerable amount of detail that is worth comparing.

Below is a list of the 40 most populous cities in the U.S., ranked by citywide Walk Score.

The following table is a match-up of the cities from both of the previous tables.

Looking at the cities in each list side-by-side gives what I think is a different, and slightly more specific, view of walkability in American cities.

Nate Berg is a contributing editor at Planetizen, and a freelance journalist based in Los Angeles. He's also on Twitter.