The theory that shrinking ailing cities is going to cure them is unproven and wrongheaded, says Roberta Brandes Gratz -- and is fueled by the same forces behind the urban renewal practices of the mid-20th century.
April 19, 2010, 5am PDT | Roberta Brandes Gratz
Share Tweet LinkedIn Email Comments

Then came the highways through the cities, piggybacking on the massive clearance of urban renewal, demolishing more whole neighborhoods. Thousands of industrial and small businesses and the jobs that came with them were lost, along with countless housing units.

Then came "planned shrinkage," the idea that cities should close down failing neighborhoods, shut off the infrastructure built to accommodate density and concentrate investment in neighborhoods still worthy of middle income investment. Places like the South Bronx were left to burn.

Then came the endless number of parking lots to accommodate all the cars driven by the commuters who fled the urban wreckage for the suburbs and were now driving on the highways that drew them out of the city. Countless recyclable buildings of all periods and architectural styles – not to mention historic structures – were lost.

Then came Hope VI which has destroyed more low-income public housing units than it has replaced, all in the name of creating economically integrated projects instead of warehouses for the poor. A worthy goal achieved at the expense of the poor, resulting in even fewer affordable housing units. Invariably, a smaller number of low-income units replaced what was demolished. The displaced families not re-housed in the new units were sent with Section 8 vouchers to already marginal neighborhoods guaranteed to create the next "blighted" district worthy of "replacement."

Then came urban agriculture which -- although a good idea for backyards, empty lots and modest-scale community gardens -- suddenly scaled up to whole neighborhoods whose remnants are often old houses which even in their deteriorated condition are built more solidly than any of the flimsy new structures replacing them today. 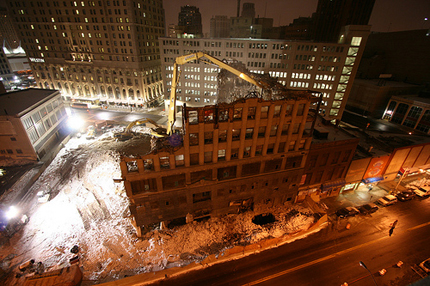 Now comes the "theory" that the salvation of distressed cities is to once again "shrink," as if shrinking had been tried before and succeeded somewhere but who knows where.

Can anyone point to one city, just one, where any of these "renewal" schemes that dedensify cities have worked to regenerate, rather than further erode, a city? Just one. No theory please; just real on the ground success.

When does a city become a "non-city," in fact a town or a village? And, if we recognize that regions are only as strong as their strongest city, what sustains that region when the city resigns itself to the status of an outpost.

Conventional wisdom today clearly notes that a key to a successful city is density. New small businesses, old big businesses, innovative start-ups, street life, public transit, walkability, community connections, diversity and appealing indoor and outdoor entertainment attractions only emerge from or follow density. Endless examples of success – not theory – of the opposite strategy DO exist, from the dollar houses Baltimore initiated in the '70s and the regeneration of the South Bronx by the community efforts that successfully fought ‘planned shrinkage' to the current efforts from Buffalo to New Orleans to Houston to Portland. All these efforts represent innovative strategies to bring people back, to regenerate instead of shrink, to build on observable successes instead of following simplistic theory.

Yet, the theory that troubled cities need to face reality and plan for shrinkage proliferate.

The question is why.

Reasonable sounding rhetoric seems to accompany the "creative shrinkage" (hard to know what is "creative" here) theorists. But let's look at some of the actual implementation differences between following the demolition path and the regeneration path. Clues to the real motives and who benefits become apparent.

Demolition money is easy to come by, often CDBG money provided by the federal government. Demolition contracts are simple, often big and, of course, given to the familiar cast of politically well-connected characters. Mayors get photo ops with local headlines about cleaning up blighted districts. Area residents are thrilled to see the rats and garbage gone, clueless of guaranteed continued decay unless something positive is added.

In contrast, one community rebuilder notes, "You are always penalized when you go to renovate. No one has to put up half the money for demolition." Money for stabilization and/or renovation has to be patched together from multiple sources. Lenders don't like the look of dilapidated old buildings, even if they are historic and architecturally beautiful. They do, however, understand demolition and formulaic building projects.

Bureaucrats have little or no experience handling such rescue and regeneration projects. Renovation doesn't easily conform to today's building codes, and building inspectors don't have enough experience to understand how to deal with earlier construction they were not trained to understand. Similarly, most well-placed contractors don't know how to renovate an existing structure, only how to build new. Money doesn't exist for just cleaning out, stabilizing, securing and landbanking worthy structures. And, sadly, remaining residents are under the illusion that demolition of the next door vacant nuisance solves crime, cleans up neighborhoods and improves the community.

Instead of promised renewal, the land lies fallow for ages. Eventually, if suddenly the idea of "shrinking" is no longer the pop theory of the day, a developer comes along to build a very suburban-like new community of garage-front, look-alike dwellings with a smaller number of occupants than could ever be characterized as urban. Without the density, no public transit is viable, no local stores and community-serving businesses develop. Instead, more car-dependent shopping malls and business centers get built, if anything gets built, and thus is created an anti-urban enclave detached from the remaining city adding no strength to the existing urban fabric.

Despite the many obstacles and the complexity of the process, tried-and-true strategies for regeneration exist, sometimes in the same cities where shrinkage by demolition is occurring. But the successful efforts share a common characteristic. In each case, something positive is being added; nothing is being taken away, except the occasional building beyond repair. Demolition is strategic and determined by people who know how to judge the remaining strength of neglected buildings. Even in the neighborhoods where vacant lots are offered to remaining residents next door for a garden, an extension or something else, something new gets added. In some community-led efforts where non-profits retrieve and renovate abandoned structures, new small investments become visible. Garbage strewn lots get cleaned. Small gardens get planted. Streets and sidewalks get repaired. Remaining property owners, now feeling a glimmer of hope, paint and fix up their forlorn property. Block parties and street fairs get organized. A sense of community evolves. The new and old residents gain confidence and open small businesses. 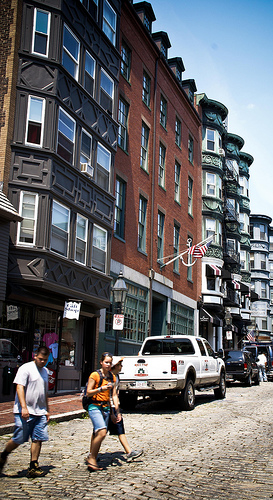 Areas where artists are currently moving into cheap or free spaces seem to be the most noticed successes reflecting this process. Here, as expected, the addition of the positive drives the regeneration.

If one looks at the history of some of today's most desirable urban neighborhoods and recognize what a staggering number of them were once deteriorated neighborhoods, if not outright slums, then a truly "creative" path reveals itself. Georgetown in D.C. Society Hill in Philadelphia. The Victorian Districts in Savannah and San Francisco. The French Quarter and Garden District in New Orleans. New York's Upper West Side, Harlem and almost every neighborhood in Brooklyn. North End in Boston. King William in San Antonio. All were dramatically deteriorated residential areas at one time. The list is endless. Clearance was never the path to rebirth. The same holds true of industrial neighborhoods. SoHo in NYC. LoDo in Denver. SoDo in Seattle. SoMa in San Francisco. SoHu in Chicago.

Even Detroit, the tragic capital of Shrinkage Theory, has productively revived areas that defied official city policies. The old Stroh's Brewery and adjacent buildings on the waterfront, conversion of assorted pre-war downtown office and loft buildings, the Harmonie Park mixed-use district, the Cass Avenue corridor and an assortment of neighborhood-based rebuilding efforts are all examples of innovative, citizen-based regeneration that is possible almost everywhere.

Cities, even the so-called shrinking ones, don't seem to have a problem spending public money for demolition and then giving incentives and tax breaks to developers to build new. Why not first give incentives and tax breaks to individuals willing to reclaim vacant buildings and commit to occupancy for a minimum number of years? That recipient must promise not to resell for a minimum number of years, as well. In addition, give the resident or local business owner the vacant lot next door, assuming there is one, on which to either use as open space or eventually expand onto or build another dwelling on. This could be a modest investment to stabilize a declining area.

And with the collapse of big industries, why not encourage with modest incentives the small, ad hoc trend of new artisanal producers, remembering the 85 per cent of new jobs are created in businesses of 100 people or less. This is happening now in many regenerating neighborhoods even during the recession and it requires far fewer public dollars than the big, one shot deals. Small measures always exceed their expectations; large ones never meet their expectations.

This is about building on existing assets, not erasing them, about recognizing precursors of rebirth, instead of ignoring them and believing in the organic process instead of relying on unsustainable project building.

This is also about observable fact, not wishful theory. The real issue is how to learn from success instead of putting forth wishful thinking.

Roberta Brandes Gratz is an urban critic whose newest book is The Battle for Gotham: New York in the Shadow of Robert Moses and Jane Jacobs