Take a ride on the Scwebebahn

I'd been obsessed with it ever since I saw The Princess and
the Warrior. (Between that and the funicular in Flashdance,
there is just something about bad-ass chicks that commute via unique transit.)
So, when I found myself with an unexpected free morning in Essen, Germany, after especially
cooperative weather for photographing the day before, I hopped on the S-Bahn towards Wuppertal to
see the famed train. 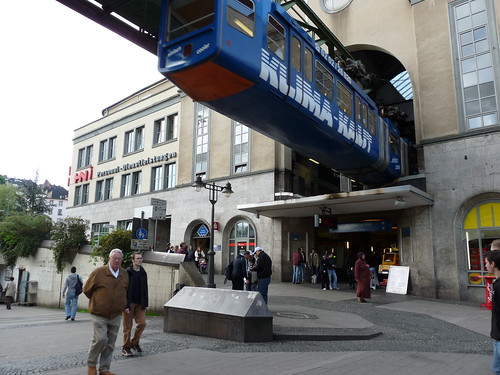 It was even better than I'd expected. I wanted to run up to
people on the train and say, "do you realize that you get to commute every day
on the coolest train ever?" Obviously, Wuppertalians are more blasé about the
situation. (If you watch my video, linked below, you'll see that no one chooses
to sit in the only remaining empty seat because it's next to me-and I've
already established myself as the crazy lady with the camera.)

A Swiss friend
later told me that "schwebe" roughly translates into "gliding," and that's just
what it feels like-a gliding train. When the train picks up some speed in
between stations and then hits a curve, the cars sway significantly. In fact,
riders are warned about the sway when they step on and off of trains at
stations. 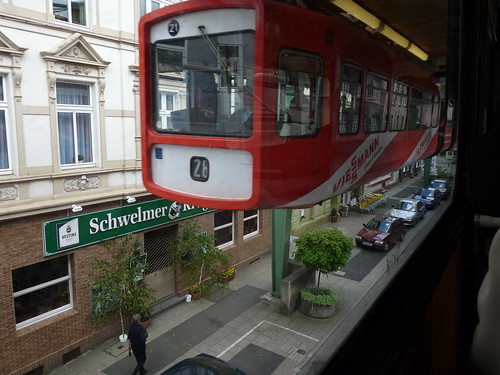 The city of Wuppertal lies in a relatively steep valley
around the Wupper River, which means that it would be technically difficult to
excavate for a subway (due to the high water levels) and that a singular, linear
primary transit line makes sense. If you bear with my crude sketch below, you can see that the riverbed is infrequently intruded upon by the train's frame footings, and the train frame is at a height that allows it to easily cross over even truck traffic on the roads. 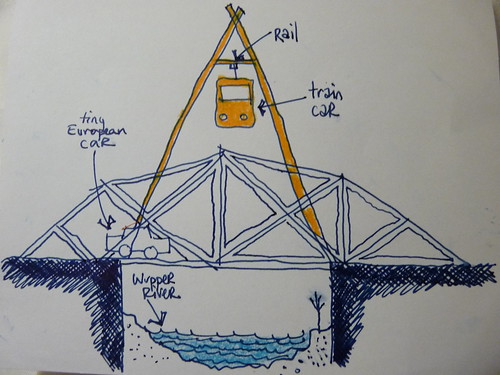 (I want to begin my next set of questions with the stipulation
that I am not some monorail nut. Though I really do marvel at Kim Pederson's backyard
monorail in Fremont, CA. Favorite quotation: "imagine how much of the
garden and fence we would have needed to rip out to put in a garden light rail
instead of this!")

I await your feedback, dear readers.

My research in Essen was a part of a German Marshall Fund
Comparative Domestic Policy Fellowship.

See a video
I shot of the ride on youtube.

Jess Zimbabwe is the Principal of Plot Strategies. She served until recently for ten years as the founding Director of the Daniel Rose Center for Public Leadership—a partnership the National League of Cities (NLC) and the Urban Land Institute (ULI).

A quarter of German long-distance trains ran behind schedule, and they're not likely to improve soon.

At the Shared Use Mobility Summit in Chicago, Jarrett Walker cautioned the tech world to keep four key transportation problems in mind.