A Neotraditional Building Boom on Campus

After decades of institutional architecture built for efficiency, schools without distinctive college towns or well cultivated campuses are finding themselves at a competitive disadvantage with universities with well cultivated campuses or college towns. Meanwhile, urban campuses are looking for ways to capitalize on their property, while providing amenities for the campus and local community. Here's a sampling of the many projects underway.

Perhaps the most ambitious -- and controversial -- of these projects is the pet project of conservative Catholic and Domino's Pizza founder Tom Monaghan: Ave Maria, Florida. Through a similar legal arrangement used by Walt Disney to develop Disney World, Moghnahan and his partner Barron Collier Companies are developing a campus and college town of 30,000 for the Catholic university he helped found, Ave Maria University. As the campus takes shape, university officials hope it will be ready for fall 2007 classes. 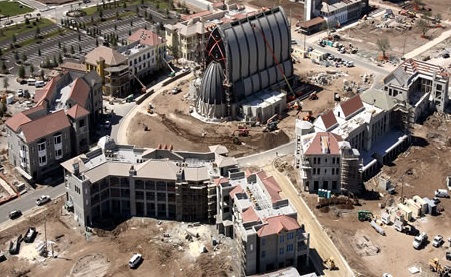 While so many projects are moving ahead rapidly, I can't help but wonder whether they will actually result in the sense of place of legendary college towns developed over decades. It seems unlikely these massive projects will support the diversity of retail and housing choice that is the hallmark of these memorable places.

Here at the University of Maryland where I am a student, administration officials are deep in negotiations with an as-yet unannounced development partner for the East Campus Project, where officials hope to transform a 38-acre parcel of land containing vacant greenhouses, aging dormitories, and bus parking into a dense, mixed-use project where faculty and students can "live, work, and play." A community group I co-founded is working hard to ensure the resulting project reflects the unique character of our community -- and is closely integrated to both campus and the surrounding neighborhoods.

As college becomes less affordable, alternatives to the traditional four-year model have been making inroads, leading some to question its lasting viability. If universities struggle, it will impact not only campuses, but cities, as well.

Planning, Placemaking, and the Public Good

What responsibilities does an urban university engaged in the act of master planning have to the city of which it is a part, and to the greater public good?