19 Ways to Redesign the World in the Covid-19 Era

The Renewed Challenge: Sustaining a City's Culture and Character

Are politicians becoming obsolete in the age of the Internet? Are they simply the 'middle-men' that will be replaced by votes cast directly by citizens? This was the issue before a veritable rock-star cast of poliltical insiders from California and around the country. So what is the G-Word?

Are politicians becoming obsolete in the age of the Internet? Are they simply the 'middle-men' that will be replaced by votes cast directly by citizens? This was the issue before a veritable rock-star cast of poliltical insiders from California and around the country. So what is the G-Word?

The G-Word is Governance. There. I've said it. And, based on recent voter turn-out statistics 91.8% of you have stopped reading. Why? Because, let's face it, for most of us it's a boring topic. 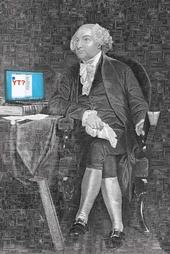 This was one of the ambitious topics of a lively, if sometimes academic debate, "Rethinking Governance in the Age of MySpace" for the first annual David Abel Colloquium held at USC in Los Angeles. A panel of experienced political insiders debated whether social networking and technology changes the very nature of how political decisions are made.

Civic connector and moderator David Abel proposed a hypothetical scenario: A small group of civic-minded individuals have gathered in a downtown restaurant. Although they have diverse political backgrounds and views, they are passionately interested in solving the federal government's lack of ability to respond to citizen's concerns. This group decides that they want to create a federal initiative to achieve "direct democracy", where citizens vote on initiatives and laws directly, not through elected representatives.

Would you sign on to the campaign? Abel asked the panelists.

Would the campaign generate a widescale following?

Sure it could, says, Joe Trippi, president of Trippi & Associates, and the former National Campaign Manager for Howard Dean's famously-technology-based presidential campaign in 2004. A small effort like this could use the Internet to grow virally to represent a large number of people -- a tipping point. He, and many of the panelists, felt that a wildly-popular grassroots political movement that relied fundamentally on Internet-based social networking and forced political change was going to emerge sooner or later.

Dana Boyd, an animated Graduate Student Fellow at the USC Annenberg Center for Communication, argued that Generation Y is not engaged in public life because they don't feel that any of this governance stuff relates to them. But, should a hot issue capture their attention, GenYers can mobilize virtually overnight, as they did when Facebook released a set of unpopular features.

On the other hand, direct democracy can dangerously imperil minority groups, argued John A. Pérez, Political Director for the United Food and Commercial Workers. If we're going the direct democracy route, we need to make sure we have a process and discussion about it, says Dan Mazmanian, Director of the USC Bedrosian Center on Governance and the Public Enterprise.

David Janssen, Chief Administrative Officer for Los Angeles County, argued that the Constitution was designed to ensure that the federal government is not responsive. He estimates that within the next decade we will not need elected officials; citizens will be able to directly vote on every county, state and federal initiative. He worries that when this happens decision-making could be much worse than today, as people vote on complex issues about which "they don't have a clue."

"The disengagement of the citizen is as much a danger to democracy as direct participation" says Sunne McPeak, President of the California Emerging Technology Fund, and the US must improve the efficiency of federal decision-making to match the pace of change globally or risk falling behind in global competitiveness.

Joe Trippi offered a dramatic concluding scenario: What if the president of the European Union held a press conference tomorrow targeted toward the US, and called on the people of the US to sign the Kyoto Protocol on behalf of the US government (which has declined to sign the agreement).

And what if 50 million US citizens signed this non-legally binding document online? Could this simple action of direct democracy unleash rapid and dramatic change in the US political system?

So let's bring this home.

Would you rather that the Planning Commission and City Council review and vote on plans, zoning and land use projects, or would you rather local neighborhood residents vote directly?

Chris Steins is Planetizen's co-Editor-in-Chief, and the founder and chief executive of Urban Insight, a leading technology consulting firm that operates Planetizen.

19 Ways to Redesign the World in the Covid-19 Era

The Renewed Challenge: Sustaining a City's Culture and Character