Urban Fables: The Role Of Storytelling And Imagery In Successful Planning Movements

New Urbanists and pro-property rights advocates have made good use of both allegory and myth to capture the attention of planners and the public.
August 7, 2006, 7am PDT | Leonardo Vazquez, AICP/PP
Share Tweet LinkedIn Email Comments

The New Urbanism and the pro-property rights movement are two of the most influential planning movements in recent history. While the ideas of each movement certainly have merit, the success of these two opposing philosophies rests not so much in the message, but in the manner the message is delivered. Taking a cue from successful religious movements, New Urbanists and pro-property rights advocates have eschewed the planners' traditional tools of charts and graphs in favor of the preacher's tools of allegory and myth. Using the power of stories and images to connect principles to people's hopes, fears and beliefs, the leaders of both movements have succeeded in creating fervent followings for their respective philosophies.

Allegories and myths are stories that are designed to illustrate what speakers believe are truths about society and the world. Allegories often have a lesson for audiences, such as the ancient Greek storyteller Aesop did with his fables. Myths have elements that despite being unprovable, represent "truth" to believers.

Using architectural images, the New Urbanism movement recounts fuzzy romantic images of a safer, simpler time in promoting compact urban form. The property rights movement offers apocalyptic visions of ravenous governments trying the steal all freedom from property owners. To the New Urbanist, the planner is Prometheus, who brings light and wisdom to the ancient Greeks. To the property rights advocates, the planner is one of those pigs that supports the tyrannical hog Napoleon in George Orwell's Animal Farm.

Both movements are adept at using imagery and storytelling to tap into their audiences' preconceived truths about American society and government.

New Urbanism promotes walkable urban form and diverse uses through such features as small blocks, gridded streets, and defined town centers with a mix of residential, commercial and civic uses. The Congress for the New Urbanism says in it's website that a good New Urbanist development passes the "popsicle test" - a kid can ride a bike to get a popsicle without having to cross a street with the size and speed of a highway. That urban form and function influences whether people decide to walk or drive is indisputable. It's an axiom of successful urban design and site planning. Where the mythmaking comes in - where New Urbanists owe more to Walt Disney than Clarence Stein - is in architectural design.

The Congress for the New Urbanism says that most like-minded architects promote classical or vernacular design. This strategy has been used by historic preservationists - and Walt Disney World in its Main Street exhibit - to evoke fuzzy, romantic notions of a safer, more innocent time. If the Grimm Brothers were summarizing the New Urbanist story, they might say something like this: "The communities of the late 19th to the mid-20th centuries, were friendly and safe. Neighbors knew each other and gathered together peacefully in public squares. Then came urban sprawl. The rush to ticky-tacky subdivisions tore apart the fabric of American communities and grew the congestion and environmental problems we face today. Building colonial-style houses on a small gridiron pattern - usually in a suburban environment - will bring us back to the good old days." 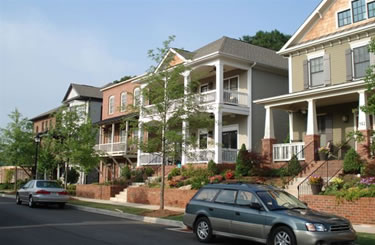 Glenwood Park in Atlanta, Georgia, is a new New Urbanist community that hopes to attract upper-middle class residents back to the city's core.

New Urbanist architects illustrate these stories with pastel drawings of Gap- and Banana Republic-clad people walking past white picket fences and cute little mom and pop shops. And you can easily find a parking spot. In the New Urbanist storylines, there are no double-parked cars, kids in baggy jeans and doo-rags hanging out on park benches, or check cashing places. Like those "reality shows" that are carefully edited and programmed, New Urbanism is basically traditional urban development with a makeover.

This allegory is most appealing to the white, suburban communities where New Urbanism has thrived. But not everybody buys into it. The 1890's through the 1940's were not especially kind to African-Americans, and many Asian-Americans and Latinos whose families immigrated to the United States in the last 50 years do not see their heritage in white picket fences and New England clapboard siding. This helps explain why, as Jim Lewis explained in the New York Times, the New Urbanists who went to the Gulf Coast after Katrina were more successful in the predominantly white small towns of Mississippi than in the black and Vietnamese neighborhoods of Biloxi. For the Vietnamese community, a neighborhood organizer told Lewis, the walking encouraged by New Urbanist design was more associated with the poverty the immigrants left behind than with their concept of an ideal city.

The New Urbanist allegory works because it connects to the complex concerns of middle- and upper-income Americans. They want to be near other people and to have new and different experiences, as long as the other people aren't scary and the experiences seem safe. That's why people who would never ride a bus or walk around on a crowded New York City street are willing to take a tram from the parking lot at Walt Disney World and spend their days in congested and car-free surroundings.

The property rights mythology is best summarized by the Castle Coalition, which according to its website, battles "greedy governments and developers who seek to take private property for their own gain." Like a medieval European fairy tale or a modern horror film, the property rights story usually involves a woman endangered by a powerful, demonic creature. The damsel in distress is usually a mature or elderly property owner -- Suzette Kelo in New London, Connecticut or Dorothy English in Oregon -- whose freedom is threatened by governments and developers. As with the dragons in Arthurian legends or the ghostly villains in a slasher film, "government" is usually a one-dimensional creature whose only intent is to destroy.

In the property rights allegory, government is a faceless non-specific entity. To do otherwise would be to reveal complex, real people -- not altogether different from the victims -- who are making difficult decisions under difficult circumstances. By using eminent domain or restrictive zoning, the government is not just inconveniencingproperty owners. It is taking away the very foundation of all the freedoms Americans hold dear.

One of many political cartoons that lampoon the recent ruling by the U.S. Supreme Court in the case of Kelo vs. New London.

This set of stories works because it offers a clear victim and a clear villain. It taps into the American libertarian fear of a tyrannical government and the loss of freedom. By tying the abstract notion of freedom to property rights, leaders of the movement show eminent domain and land use regulations as a very slippery slope into tyranny and oppression.

In the property rights allegories, all property owners are pure of heart and mind. There are no speculators or slumlords holding out simply to extort the public treasury. Unless its for a road or bridge, (which ironically most helps the greedy developers that the Castle Coalition fights against), the government is taking property to enrich itself or its developer friends. This government does not provide services such as schools, police or parks. It is simply a ravenous demon from a Hieronymus Bosch nightmare.

Looking at each movement's narrative, the storylines are simple and the distinction between good and bad is clear. The problems that they intend to resolve are easy to diagnose and easy to fix. As is common with religious allegories, they point to a distant past when life was much better, if not idyllic.

In these stories, neither the growth of sprawl nor obtrusive land use regulations were reflections of the public interest. Rather, they were brought on by those, like the serpent in the Garden of Eden, who had selfish agendas. All this serves to create a sense of urgency among followers of each movement. What audiences hear, whether or not the leaders say these exact words, is something like "It's either a town center or a strip mall!" or "We're all at risk of losing our homes!"

Let me be clear - I do not intend this essay to be a criticism of the ideas or techniques of either movement, nor am I suggesting that New Urbanists or property rights advocates are blind followers of misguided faiths. Like the allegories and myths that each camp employs, I too have simplified for the purposes of communicating my point. Within the New Urbanism movement, there are debates about historic versus more contemporary design. Likewise, there are arguments within the property rights movement about when, if ever, eminent domain is appropriate and what constitutes overly restrictive zoning.

What the success of New Urbanists and property-rights advocates demonstrates is the importance in communicating with people about the principles and goals of land use plans - and connecting them with clear and resonant images that motivate people to support the ideas within a plan. While planning still may be considered a mostly technical exercise, any planning philosophy that wishes to duplicate the success of the New Urbanism or the pro-property rights movement will need to create a convincing message that can persuade the public to not just agree with an idea - but believe in it.

As for the New Urbanism and the pro-property rights movement, Aesop would be proud.

Leonardo Vazquez, AICP/PP, is an Instructor and Director of the Professional Development Institute at the Edward J. Bloustein School of Planning and Public Policy of Rutgers, the State University of New Jersey.