Pedestrian pioneer Alan Durning describes what his family of five is learning by living without four wheels in Cascadia's largest city. Can they survive without the essential currency of the modern American community?
July 17, 2006, 7am PDT | Alan Thein Durning
Share Tweet LinkedIn Email Comments

A few months ago, my 18-year-old son slammed our 19-year-old Volvo station wagon into the rear of a high-clearance pickup. All the people were fine. So was the pickup.

But the Volvo wasn't. Repairing it would have cost many times the Blue Book value. So we accepted the insurance company's check for $594 and bid farewell to the family car.

Happenstance thus made us car-free. But after some serious discussion with my wife Amy and our three children, we decided to stay that way. Are we crazy? We don't think so. We've been reducing our car use for some time; I work in the sustainability field; and we live in a compact, walkable community. We decided to try car-free living as an experiment for a year, to see whether a middle-class family of five could live a contented life in Seattle, Cascadia's largest city, without owning their own car.

Thanks to past choices plus some good fortune, car-free living is a smaller disruption for us than for most people. Our three kids are old enough (the youngest is now 11) to walk or bike unaccompanied to a lot of places. We live in a compact city neighborhood -- Ballard, a typical Seattle streetcar neighborhood -- with an abundance of nearby amenities. We've got respectable local transit service and five FlexCars stationed within a mile of our home.

We replaced the station wagon with our 1996 Burley stroller/bike trailer. We've resurrected it to haul groceries, library books, and (recently) a broken vacuum cleaner. The Burley's range is only as far as you want to push it. And for my family, that limit seems to be about one mile. Less than a mile is a comfortable walk; more is a burden. 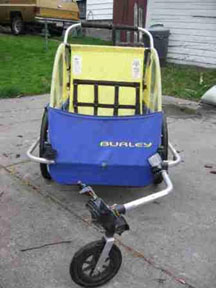 In the process, we're truly discovering our "walkshed" -- what we call the one-mile perimeter that is our pedestrian travel zone. Fortunately, because we chose to live in a compact community, our walkshed turns out to be well stocked. We can stroll to scores of shops and services -- 248 to be precise. I know because I counted. (You can count your own walkshed score; this Daily Score blog post explains).

Our experiment has brought challenges too. One of the biggest was highlighted in a recent Seattle Weekly column about local car-less experiments. The writer criticized us because we weren't going entirely car-free -- we were "mooching rides", as he put it, a practice he likened to bumming cigarettes while trying to quit.

The column sparked a spirited response in the Seattle blogosphere, with many comments attacking the writer for describing our occasional car-sharing as "mooching". I believe that's because the writer was touching on a critical cultural issue --the dual relationship that our society has with cars.

This is especially true in parenting. The most routine favor that parents give -- the currency of parenting -- is the ride. I give your kid a ride to practice; you give mine a ride home. You bring your kid over to play; I drive her home again.

When the bonds of mutual reciprocity are thick and stretch in many directions, you have a strong community -- one that's high in social capital. And you've got the feeling, as a parent, that many hands are there to support you.

But subtract the car from this equation, and you're suddenly out of currency for the most basic exchanges.

Friends have reacted to our car-less state in different ways. Some have stepped up, hero-like, and insisted on doing all the driving themselves, insisting that we don't use Flexcar when they already own one. Some have withdrawn, uncertain how to interact with us because we don't hold the currency. Feeling this way, they often take the path of least resistance, which is to swap rides with someone else instead. Sadly, that leaves us, and our kids, out of the community.

To guard against heroic over-giving and shy withdrawal, we have been trying to become more assertive about alternative exchanges, bartering child care and other favors for rides when a ride is necessary.

Despite the ambiguity (How many hours of child care are worth one ride?), other parents are receptive, and these more-complicated exchanges build community just as quickly as ride swapping.

Sometimes, it even gives us more community. One of Amy's buddies reports that she loves that we don't have a car because she gets to see Amy more. They get groceries together. The friend drives; Amy buys the lunch. They both enjoy the outing.

You can read and comment on Alan's blog posts chronicling his family's car-less adventure on Sightline's blog, The Daily Score.