Who's to Blame for Gentrification? Planners, Apparently A few dozen pages into Capital City, Samuel Stein intones that being an urban planner "can be a really shitty job." While Stein, who is not a planner but a doctoral student in urban studies, could be faulted for being crass, his profanity actually borders on tenderness. See, up to that point, Stein spends many pages explaining how urban planners are, at best, manipulated by the nefarious forces of capitalism and, at worst, eager functionaries in the effort to marginalize, impoverish, and displace vulnerable populations in America's cities.

At least Stein pauses to express a little sympathy. But then he keeps right on going. 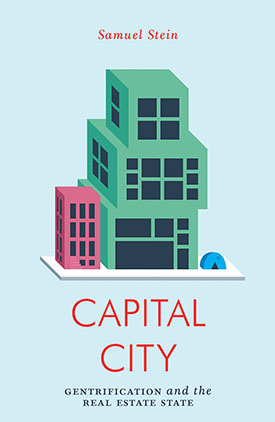 Stein's anti-capitalist, anti-gentrification screed Capital City is so familiar it almost defies discussion. Capitalism, he argues, has taken over American cities to such a great extent that they are now controlled by the "real estate state." Naturally, the real estate state seeks to maximize its investment, so it builds ever larger, ever more luxurious properties and charges ever increasing amounts of money to sell and rent them. Meanwhile, the real estate state attempts to clear out the poor people, who are, in many cases, also the black people, the brown people, and other unfortunate souls from historically marginalized groups.

But we knew this already.

Though he's an extremist, Stein isn't entirely wrong. Capitalism sucks sometimes. But his accusatory tone, which seems to be a mainstay of today's radical left — Exhibit A: Peter Moskowitz's ghastly How to Kill a City—makes his argument almost impossible to stomach.

Here are some gems:

"A planner's mission is to imagine a better world, but their day-to-day work involves producing a more profitable one."

"Planners did not invent gentrification, but they help foster its development and transform it from a local phenomenon into a global business model."

"The job of planners, then, is to keep business booming as long as possible, and when land and property values ultimately fall, to get them back up as quickly as possible."

"Whatever else they are working toward, planners in the real estate state are also planners for gentrification."

If that wasn't enough, Stein charges planners with some of the nation's most heinous crimes, just for good measure. Referring to an era when cities barely existed, he writes that "proto-planners [whatever that means] enabled the country's murderous westward expansion, and mapped the rail networks and other infrastructure that made it possible." That's right: the real villain in Manifest Density wasn't General Custer but rather his cartographer.

Even if we were to forgive these sins, Stein figures that planners are incorrigible: "It is hard to imagine planners taking a serious stand against gentrification." In other words, citizens shouldn't expect anything of planners and planners shouldn't bother seeking redemption. We appear to be at an impasse.

Stein contends that there's nothing planners can do to help cities anyway. He explains that planners' foundational policy tools—upzoning and downzoning—both support the real estate state. Upzoning lets capitalists cram more expensive real estate into a given lot and "encourage[s] developers to buy existing properties, knock down the buildings and build something bigger." Downzoning "dramatically raise[s] property values for existing building." Stein unhelpfully concludes that,"in either case, planners produce enormous value with the stroke of a pen, and hand it over to land and property owners."

Amid this futility, Stein notes that urban planners have a public relations problem: "This lose-lose-lose situation is one of the main reasons so many residents caught in the violence of gentrification are deeply skeptical of urban planers." Never does he consider whether irresponsible stereotyping, inflammatory rhetoric, and defeatist conspiracy theories might be making people skeptical.

All along Stein's ratio of empirical evidence to accusations is miniscule. He lobs assertion after assertion but rarely refers to a statistic or even an anecdote to support them. And, in a book that excoriates planners and planning, you'd think that Stein might at least try to speak with an urban planner. Maybe he'd try to get their side of the story, right? But no. Apparently they were all in a meeting at Blackstone the day he called. This too is a move out of the radical left playbook: never, ever let people defend themselves.

Capital City could have been an important book, or at least a good book. Here's how:

It could have identified actual capitalist entities in cities and described how they are manipulating their respective cities, influencing specific planners, and inflating real estate values according to the nuances of their respective markets. Instead, aside from a few compelling glimpses into the strategies of Blackstone (apparently the largest landlord in the country), Stein refers over and over again to the misdeeds of "capital." When I see this "capital," I'll be sure to give it a piece of my mind.

It could have included real research to demonstrate the actual extent to which the Blackstones of the world are influencing cities' plans and carrying out their investments. Which cities? How much real estate? What are the actual spillover effects of, say, a new condo development in a newly hip neighborhood?

It could have referred to specific policies that "capitalists" have lobbied for in cities, and it could have explained how they have capitalized on those policies.

It could have acknowledged that, while gentrification and displacement are important, complex problems in some cities—particularly Los Angeles, San Francisco, and, especially, Stein's home base of New York—plenty of cities across the country still suffer from disinvestment, depopulation, and neglect. They might enjoy a little more capitalism.

It could have at least entertained the notion that the high cost of living in gentrifying cities is attributable at least in some teensy-weensy part to rising incomes and rising demand for housing among the middle class and not just to Russian oligarchs' need to unload rubles.

It could have done the same with demographics, acknowledging that population pressures in the country overall—327 million and counting—and specifically in attractive, economically vibrant cities mean that more people are competing, and therefore outbidding each other, for scarce real estate.

It could have acknowledged that Donald Trump is one of the world's crappier and most devious real estate developers rather than disingenuously present him and his family as "emblems of the private side of US planning history."

Instead, Stein talking about capital sounds like Donald Trump talking about immigration. He takes a complex issue about which reasonable people of all political persuasions can disagree and instead turns it into a collection of slogans, conspiracy theories, and straw men. He dehumanizes capital, just like he dehumanizes planners, such that it’s impossible to how to oppose it. He preaches to his comrades rather than contribute to an important discussion about economics, governance, aesthetics, and social justice. At one point—and re-read the passage to make sure I understood—Stein compares cities in China and Cuba favorably to those in the United States. Mao and Fidel would be delighted.

The maddening part is that, Stein actually understands urban planning. In moments when he is not blinded by his own fury, Stein bracingly describes some of the opposing forces—practical and ideological—that make planning complicated. He describes the two fundamental contradictions of planning: the "property contradiction" and "capitalist democracy contradiction," in which, respectively, developers want free rein but need governmental intervention; and the fact that planners try to promote public participation while also serving special interests (i.e., developers). He astutely notes that "industrial capital" had a vested interest in keeping cities affordable, since factories needed workers, and workers needed conveniently located homes. These are compelling, nuanced ideas that might cause planners to reconsider their positions without yielding to Stein's scolding.

Stein's intellectual dishonesty really comes to the fore in his disregard for urban politics. He writes of planners as if they are omnipotent and autonomous, with almost no reference to elected officials or to the people who elect them.

In many American cities, the people who disproportionately cast votes are homeowners. Homeowners, despite their folksy appearance, are miniature capitalists. They might not all have their own venture capital funds, but they are still prone to protecting, and profiting from, their investments. That's what makes them NIMBYs. And NIMBYism is, as far as I'm concerned, one of the leading causes of gentrification.

Some of the most dramatic increases in cost of living have taken place in neighborhoods that are constrained, where the scarcity of real estate has enabled the wealthy to outbid the poor. These places include Venice Beach and Highland Park in Los Angeles; the Mission and in San Francisco; and much of Brooklyn. These are places where the decisions of thousands of individual humans have invoked basic laws of economics, without hardly any intervention from planners, the finance industry, or developers.

Stein makes literally zero mention of this. That's because to give homeowners due credit for gentrification would, if not contradict, then at least detract from his narrative about the Blackstones and the Bloombergs of the world.

Why, then, is Capital City worth a moment of any planner's time? Two reasons.

First, rather than alert planners to the flaws of capitalism—of which most planners are probably aware—Capital City alerts them to the types of discussions swirling around behind their backs. Stein illustrates the next wave of anti-planning activism and gives them at least a chance to develop responses and, one hopes, integrate anti-capitalists into the broader planning discussion before they can do too much damage. Cities should absolutely strive for all the things Stein wants—but they should do so in ways that actually make sense. And they should take the left's rectitude with a grain of salt.

Second, in the final chapter of Capital City, Stein presents some ideas that are actually worth considering. Granted, he puts in a word for the abolition of private property, and he seems pretty jazzed about destroying capitalism generally. But he also admits that maybe cities should pursue pragmatic solutions to these problems. Stein suggests vacancy taxes, luxury fees, value-capture taxes for landlords, promotion of industry, tenant protections, land trusts, and methods to put more private land in public hands. All of these are worthy of consideration. And, I would remind Stein, they stand a higher chance of success if they're presented by advocates who don't insult the very people who would draft, fight for, and implement them.

Sure, planning can be a lousy job. It's less lousy, though, if people who care about cities can learn to speak respectfully to each other, acknowledge common ground, and work together to make everyone's lives better.

How to Adopt Long-Term Anti-Racism Solutions as an Urbanist

Nic Esposito calls for an "anti-racist reframe" of urbanism to address the attitudes and policies that have perpetuated racist systems and upheld capitalism at all costs.