Planning and Zoning for Growth: A Few Lessons from Los Angeles

C.J. Gabbe guest blogs about a recent article in the Journal of Planning Education and Research. The quantity, quality, and location of new housing affects affordability, climate change, and social equity. Zoning changes that enable more housing construction ("upzoning") are often necessary and yet we have little empirical evidence about where and why rezonings occur. In a recent article in the Journal of Planning Education and Research, I examine the prevalence and characteristics of upzoning in Los Angeles.

To set up my analysis, I began by assigning every Los Angeles parcel with zoning attributes from 2002 and 2014. I flagged areas where zoning changed, and I focused on parcels where more residential development was allowed. I then developed regression models to estimate the odds that a given parcel was upzoned after 2002 based on its neighborhood amenities, regional accessibility, transit proximity, initial regulatory characteristics, environmental features, and local socioeconomic and demographic characteristics.

My research shows that upzoning was uncommon in Los Angeles. Only 1.1% of the city’s parcel land area was upzoned between 2002 and 2014. Some of this upzoning was city-initiated following adopted plans, but property owners initiated many of the upzonings. When upzoning did occur, it commonly followed a path of development opportunity combined with least political resistance.

Upzoning was most likely for parcels: 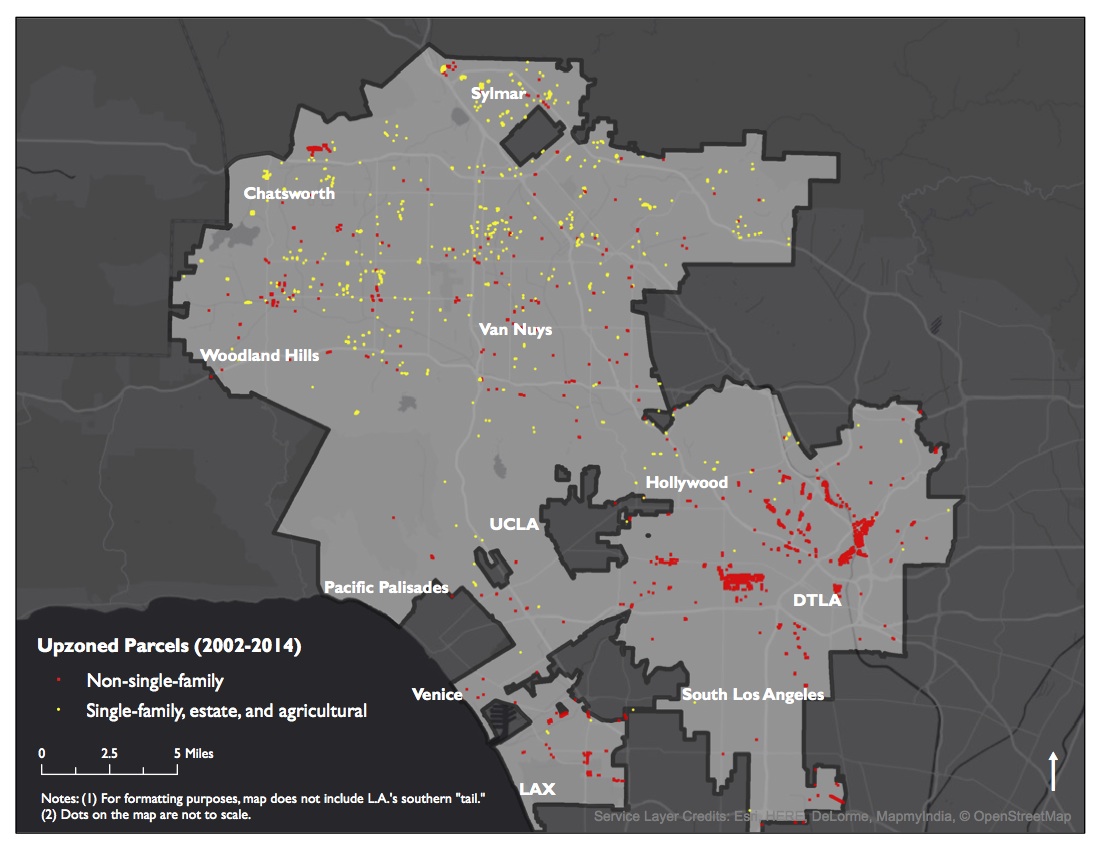 Many American cities–like Los Angeles–will need to update their plans and approve zoning changes to achieve broad policy goals of limiting sprawl; increasing walking, biking, and transit ridership; improving access to good schools and jobs; and expanding housing supply. Based on this and related research–and my experience in planning practice–I propose four key principles for planning and regulating urban development:

In short, planning for the future may not be easy, but it shouldn't be impossible. Through proactive planning followed by zoning updates, growth can be equitable, environmentally sensitive, and meet the needs of existing and future residents.

Gabbe, C.J., 2017. "Why Are Regulations Changed? A Parcel Analysis of Upzoning in Los Angeles." Journal of Planning Education and Research

L.A.'s Crackdown on McMansions Hasn't Stopped Them from Going Up

Legislation to stop construction of McMansions is being undermined by a zoning loophole.

A new study makes a visual case against the narrative that spot zoning and a broken development approval process are running roughshod over the entire city.