Does urban living threaten our sanity and happiness? Popular culture is rife with stories which suggest that living in a city increases loneliness and unhappiness, and some scientific studies indicate that urbanization increases mental illness and depression. Are these claims credible? How can communities maintain mental health and happiness?

These are important and timely questions. The human experience is increasingly urban; transitioning from rural to more urban areas. Decision-makers and individuals need practical guidance on how to maximize sanity and happiness when planning cities and choosing where to live.

My newest report, "Urban Sanity: Understanding Urban Mental Health Impacts and How to Create Saner, Happier Cities" examines these question. It indicates that city living has mixed overall mental health impacts. Credible research suggests that urban residency can increase psychosis and mood disorder risks, addiction to some drugs, and some people's unhappiness, but tends to reduce dementia, some types of substance abuse and suicide rates, and increases happiness for many groups, particularly very poor and alienated people. Urban living also tends to increase mental health by increasing economic opportunities, fitness and health, and access to mental health and addiction treatment services. The table below summarizes these effects.

In most countries, surveys find higher self-reported happiness (also called life satisfaction) in cities than rural areas. In the United States, rural residents report slightly (up to three percentage points) higher average happiness ratings than in large cities, but this probably reflects confounding factors, so they do not really indicate that people who move from rural to urban areas necessarily become less happy.

Rural areas tend to have much higher (about double) suicide rates than urban areas, which suggests that city living increases overall mental health and happiness. If urban living double residents' lifetime psychosis risk, from about 1% to 2%, as some researchers suggest (others estimate much smaller effects) this approximately equals the higher rural suicide rates. Since psychosis is generally treatable and transitory, while suicides are permanent and devastating, cities' increased psychosis risk is generally preferable to higher rural suicide risk.

When considering how environments affect human sanity and happiness it is important to keep in mind people’s tremendous diversity and adaptability. Humans live successfully in a wide range of environments, from frozen tundra to dry deserts, and from single-family houses in sprawled suburbs, to high-rises in dense city centers. Many of us will live in and adapt to a variety of environments during our lifetime. We shouldn’t assume that our personal preferences are universal or unchangeable.

Overall, I found little credible evidence that urban living significantly increases overall insanity or unhappiness, and lots of evidence that most people are mentally better off overall living in compact, mixed, walkable neighborhoods. The scientific studies which indicate that urban living significantly increases mental illness and unhappiness tend to be incomplete and biased; they consider a limited population, and fail to account for confounding factors and so cannot differentiate between association and causation.

There is plenty of empirical evidence that most people are happier living in cities, including huge worldwide rural-to-urban migrations, and high urban housing costs; these would not occur if billions of people did not consider themselves better off overall in urban conditions. Much of the evidence that consumers dislike cities, and that cities increase mental illness and unhappiness, are specific to North American conditions where public policies are strongly anti-urban and cities have severe social problems; as a result, such evidence does not apply to economically successful, well designed urban neighborhoods.
This study identified the following mechanisms through which urbanization can impact mental health: 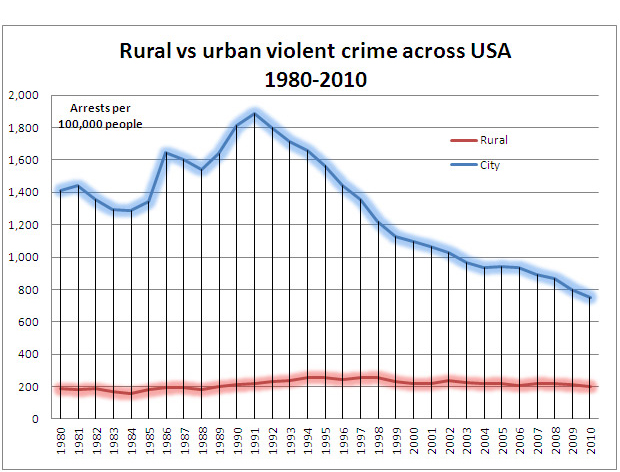 This research suggests that the following urban policies and design strategies can help create saner and happier cities:

This research also provides insights for increasing mental health and happiness in suburban and rural areas:

This is a challenging and emotional issue; many people assume that cities are either good or bad, and search for supporting evidence. This is understandable. Urban and rural areas tend to differ in many ways, including values and lifestyles; people often favor the geographic area that reflects their identity. Because city living (particularly apartments and public transit) is often stigmatized, many people work hard and commute long distances in order to afford a single-family house and a personal automobile; they may feel threatened by evidence that city living can be healthy and enjoyable, which would question the value of their sacrifices. In addition, many cities have unattractive and unpleasant features, including concentrated poverty and social problems, which provide empirical evidence that cities are physically, mentally and morally dangerous.

Another challenge is common confusion concerning what constitutes urban. The term conjures up images of skyscrapers, crowded sidewalks, subways, and concentrated poverty; although these conditions exist, they are not representative of the overall urban experience. Urban includes a variety of community types, ranging from city centers to suburban villages. Most urban residents live in moderate-density neighborhoods that contain a mixture of single-family and low-rise apartments, and rely on a mixture of walking, cycling, bus and rail transit, as well as automobile transport, and most cities have a mixture of low-, middle- and high-income households. People who imply that all urban residents live in high-rise apartments and forego automobile travel, and most urban residents are poor, are using atypical examples.

This is not to suggest that everybody should live in dense cities; some people are unsuited due to their lifestyle or temperament, for example, because they own large pets, engage in noisy activities, or are uncomfortable with cultural diversity. However, because cities tend to improve economic and social opportunities, many people benefit from urban living overall, because their economic and social gains more than offset any additional mental stress, particularly over the long run as they become accustomed to urban environments. Since urban living reduces per capita land consumption and transport costs, it tends to provide additional, indirect benefits.
Many people should find this research reassuring: it suggests that most people can take advantage of urban living benefits without sacrificing their sanity or happiness, and good planning can help create saner and happier cities.
Urban Development mental health Mental Illness Happiness Life Satisfaction Urban Planning Community Cohesion View More

San Francisco to Use Conservatorship for Some Mentally Ill Homeless People

Thanks to legislation by Sen. Scott Wiener passed last year, San Francisco will apply a new tool to force treatment on some homeless, mentally ill people who refuse it, but it's limited to five people annually. A new Wiener bill would expand it.

This Is Your Brain on E-Scooters

A survey from scooter operator Spin indicates that e-scooter users experience a boost in relaxation and positive feelings after a ride.

How Affordable Housers Perpetuate Past Harms, and How They Can Do Better

Some elements of affordable housing—from the development process to the way buildings are managed—are rooted in racist assumptions that dehumanize residents. Here are some simple ways you can be a better housing provider.