Leveraging the Wisdom of Crowds through Participatory Platforms

New technologies are providing participatory platforms that allow individuals to share their ideas, interact with other's ideas, and work towards collaborative solutions to resolve problems or take advantage of opportunities. Kevin C. Desouza, PhD offers five guidelines to ensure that the use of such emerging technologies are maximized by practitioners.

To design and plan for smart cities we must have platforms that support the leveraging of intelligence and wisdom from a diverse set of stakeholders, sometimes referred to as "the crowd." Towards this end, it is important for designers and planners to understand how to construct, and manage participatory platforms. Simply put, participatory platforms can be seen as canvases that allow individuals to share their ideas, interact with other's ideas, and work towards collaborative solutions to resolve problems or take advantage of opportunities. While the concept of tapping collective knowledge is not new -- think about the traditional town hall meetings or the various committee forums -- today we can take advantage of technologies to design participatory platforms that bridge space and time constraints.

New technologies afford us not only the capacity to include more people, and more diverse sets of people, but also allow us to more deeply immerse ourselves in the design and planning elements. Consider simulation and modeling technologies, which allow us to visualize projects, study the emergence of interactions among various elements of a plan and system, and engage citizens by allowing them to participate in an immersive environment.

Let's look at Crowdsourced Moscow 2012, a public space game that simulates a virtual world resembling the City of Moscow, as one such example. A major issue facing Moscow today is the lack of public platforms for people to interact with each other. There are few avenues for people to discuss what they want in the city and convey this to the government agencies. Crowdsourced Moscow allows citizens to interact with a simulated model of Moscow consisting of several types of virtual agents like residents, city administrators, architects, and developers. Through the game, citizens understand the objectives, incentives, and values of each group of citizens (e.g. residents versus architects) and have to negotiate them to arrive at robust solutions for city problems. Some of these problems include the proposed construction of parking at Pushkin Square and the proposed demolition of the Peter I statue on Botony Island.

Over the last two years, and especially over the past six months since taking the helm as the Director of the Metropolitan Institute at Virginia Tech, I have been investigating the nature of participatory platforms and their relevance, value, and impact on the future of design and planning. Leveraging the intelligence of crowds in the design and planning of installations (e.g. buildings), systems, and even large ensembles (e.g. cities) is a non-trivial task. Planners need to learn how to orchestrate participation on these platforms so as to arrive at plans that are representative of community needs and within scope, budget, and resource constraints. Failure to achieve this will result in plans that fall prey to the foolishness or the rowdiness of crowds. Here are five simple guidelines to consider:

I end this feature with a concluding example that highlights the potential of participatory platforms for leveraging wisdom of crowds in planning and designing smarter cities. Instead of relying on a small cohort of ‘experts' to interpret citizen needs and desires, citizens themselves develop and even implement solutions to urban issues. 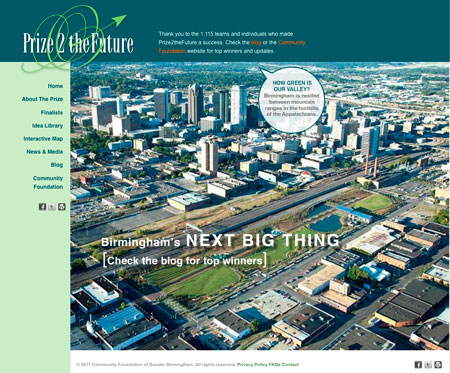 In 2011, Birmingham, Alabama sponsored a competition for ideas to transform a portion of the city. The Prize2theFuture competition inspired over 1,000 teams from 39 countries to submit ideas for revitalizing a vacant area of downtown. Instead of hiring in a handful of developers, the city opened the process to the whole of the world and invited their visions for a crucial corner of their city. The $13 million assembled for the event and the subsequent development was gathered by into a Community Catalyst fund, notably from 54 new donors. The winning submission, One Birmingham Place, was a design that embraced the culture of social media and digital communication, with an iLab (an open-access computer lab), a Center for Modern Communication, a public display screen, and a theater.

The future of design and planning is certain to be around participatory platforms, designers and planners should embrace these platforms and leverage their potential towards designing smart(er) cities through open, inclusive, and collaborative approaches.

Kevin C. Desouza, PhD is the director of the Metropolitan Institute and an associate professor at the Center for Public Administration and Policy at Virginia Tech. Before joining Virginia Tech, he was an associate professor at the University of Washington (UW) Information School and held adjunct appointments in the UW's College of Engineering and at the Daniel J. Evans School of Public Affairs. He holds a visiting professorship at the Faculty of Economics, University of Ljubljana. Desouza has received over $1.4 million in research funding from both private and government organizations. For more information, please visit: www.kevindesouza.net.

A reply to skeptics about the democratic power and potential of civic crowdfunding platforms.

As part of the Vision Zero initiative for traffic safety, the city has hosted a map system that allowed citizens to report safety issues encountered on the street. With the reporting period now over, you can still peruse the findings of the exercise.