"It's a forum, not a formula," Ellen Dunham-Jones, author of Retrofitting Suburbia

and a New Urbanist, explained. We crossed paths near a pair of Wisconsin's famous cows, on display at the Saturday Farmer's Market on the steps of the State Capitol. Cheese of all sorts was in abundance. Dunham-Jones and I were talking about the persistent perception that New Urbanism = front porches and very little else. 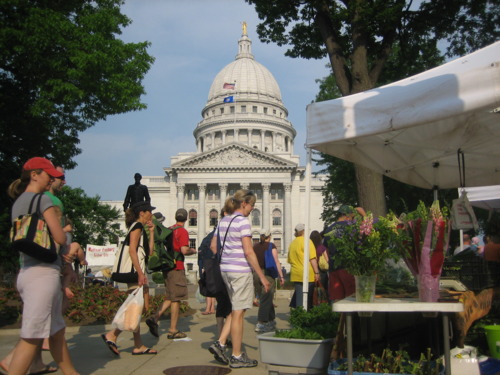 She's right – the Congress for the New Urbanism (19 this year) is a living, breathing forum, a discussion that is historically ripe with different approaches and solutions. While there is growing consensus among members on most topics – things like expanding urban agriculture, building bicycle and pedestrian infrastructure, and using historic building practices – there is always room for some high-level debate. I snuck out of the end of one session with architect Peter Calthorpe only to step into another session where the speaker was in the middle of saying, "I never understand what Peter Calthorpe is talking about."

The hallways are where the Congress really gets interesting. It's difficult not to get pulled into a conversation about financial models for bike sharing programs, or the finer points of form-based codes. Darin Dinsmore bumped into me in the halls and asked, "Do you have a minute?" Before I knew it, we were an hour into a very convincing demonstration of Crowdbrite, a comprehensive public participation tool he has built over the last year that melds community meetings with online engagement. Dinsmore has been a consulting planner since 1993, and Crowdbrite reflects his deep knowledge of the planning game and an obsession with getting the tool right.

Public participation, bike sharing, farmer's markets, transit – aren't these the bread and butter of urban planners? Benjamin Schulman, communications director for CNU, explained that this isn't an accident. "CNU is the perfect meeting place for all these different threads and disciplines. New Urbanism is the umbrella under which all forms of urbanist thought can come together," he told me.

In fact, planners, I've got a news flash for you: New Urbanism IS you. Whatever impression you've gotten over the years that New Urbanists only care about traditional architecture would be quickly dispelled by CNU19. Exhibit A? Congressman Earl Blumenauer, beloved by planners everywhere, giving Saturday's plenary address. 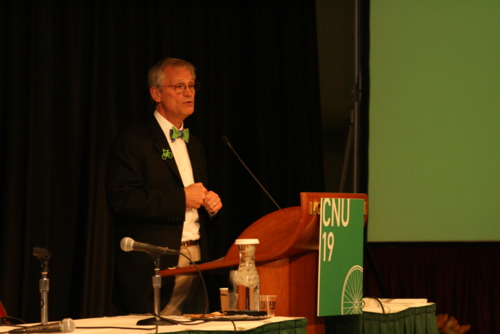 For those not embroiled in Beltway politics, Blumenauer painted a disturbing picture of the influence of Tea Party Republicans on the current debate. Even amid the political struggle over any bit of Federal spending, Blumenauer said that he remains committed to saving the world " one community garden, one bike path, and one accessory-dwelling unit at a time." The Congressman from Oregon was most excited about the newly-elected Mayor of Chicago Rahm Emmanuel. "Pay attention to Chicago," he said. "There are opportunities in America's Second City. It's going to be a very bold urban palette."

Peter Calthorpe, meanwhile, has his focus fixed firmly overseas. In a session titled, "China: The New Frontier", Calthorpe explained that he sees a lot of possibility in Chinese urbanism. "The densities, the mix, the transit are all on target," he said. "They just have some problems with the urban form." Calthorpe explained that Chinese cities like Beijing are plagued with megablocks a quarter mile long, and the highrise buildings that line the street are the equivalent of gated communities. "Street life and walking have always been a part of Chinese culture, and this new development is thwarting that," he explained. "How we get them down to the fine-grained, human grid is really the challenge."

While a significant number of sessions tackled planning issues like urban agriculture and transit-oriented development, an intellectual, architecture-based through-line was still pervasive. What was new was a sense of greater cooperation between architects, planners and communities. "I don't believe we're going to succeed as a movement or as a country without harnessing the power of architects," said New Urbanist architect Stephanos Polyzoides in Thursday's keynote. "We need to engage them in a framework that they find enabling and appropriate."

Modernist architecture, traditionally the villain of urbanists, was even absolved of blame at the conference by architect Steve Mouzon. Mouzon explained that the "death of tradition" happened before modernism really took hold, starting in the early 1920s. Before then, architecture was a shared, collective wisdom, and an emphasis on uniqueness broke that collegiality. Another session, titled "Learning from Likely and Unlikely Sources," deliberately pushed New Urbanist architects to look beyond the CNU network and celebrate the work of modern or late-modern architects that shaped and influenced their thinking.

The ultimate event of CNU19 was a showdown between Andrés Duany, New Urbanism's most vocal proponent, and Charles Waldheim, Chair of Harvard's Landscape Architecture Department, over the growing "landscape urbanism" movement. I unfortunately missed the debate because I had to catch my plane home, but this year the academic brawl seemed beside the point. Madison, Wisconsin's downtown is an active illustration of the success of the livability principles that were the real meat of CNU19, and for once Mr. Duany's forceful personality was not needed to get the point across.