Is there an ideal model for a city's circulation, a "supermodel"? Fanis Grammenos reviews a new paper that proposes the use of organic forms first recognized by Christopher Alexander.
August 9, 2010, 9am PDT | Fanis Grammenos
Share Tweet LinkedIn Email Comments

In a recent article, Witold Rybczynski praised the genius of architect and author Christopher Alexander and deplored the fact his great work is absent from architecture and planning schools curricula. Instead, he grieved, schools are busy with obscure academic wanderings on deconstructivism or other mind-numbing –isms. The rigour and depth of research such as Alexander's are given up in preference for abstruse esoteric theorizing or preaching. Though he created a large following, he fathered no "–ism", simply a seminal book. Neither did he profess that the "Patterns" he recognized in his book A Pattern Language would be essential in solving the energy crunch, social disparities, alienation, ugliness, crime and other man-made city problems.

While absent in academia, Alexander still exerts influence in these two fields. Many practitioners admit to having his Pattern Language "handy on the desk as a constant reference". On the research side, his disciples, collaborators and many followers, among whom I humbly place myself, continue the exploration.

A major contribution is the latest paper by a team of four (Michael Mehaffy, Sergio Porta, Yodan Rofe and Nikos Salingaros) which advances Alexander's work to its logical next stage: a general circulation network model for a city that subsumes and integrates many preceding detailed patterns; a super-model, an Alexandrian SimCity one might say. 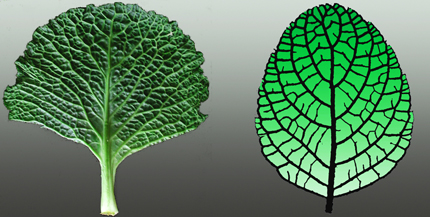 The paper touches on many current topical and contested issues and settles a few. As I understood it, the paper:

Why bother with a supermodel? The same unassailable rationale that stood behind creating the master-compendium of 260 "patterns" applies equally well to creating one that summarizes many. One step up in the organization ladder: from genomes to organs and to a full organism. Another good reason is that it might help refocus the planning discourse where Alexander placed it in the 70s: on the rational analysis of conflicts and their physical resolution.

A third ground is the common aspiration of all disciplines for a unified theory that explains the whole gamut of observable phenomena; a fundamental belief that order underlies the apparent chaos.

Finally, one very practical ground. Ever since the denigration of the transportation network models set out by NCUT (1958) and ITE (1984), an intellectual vacuum was created that was soon filled with vague notions of the "organic" network, the "village" image and the "small town" perfection or simply "the grid". Organic networks are fascinating to look at but hardly applicable to cities directly. The same applies to images of villages and towns. The growth and ultimate form of each of these networks emerges from a codified set of relationships conducive to survival. A model that draws on and expresses contemporary relationships is needed to fill the void.

With this newcomer, there are now three contemporary alluring supermodels that have more similarities than differences: The "Urban Network", the "Fused Grid" and now the "Emergent Neighborhood"; "contemporary", because they are all born of the dynamics and tensions of a young and unprecedented era – ours. They all arrive at similar organizing principles even though each starts from a distinct mix of premises.

The paper promises more research to supplement the logic of its propositions. In addition the authors may look at how to reintegrate explicitly Alexander's previous neighborhood and district related patterns. Moreover, no large scale pattern would be complete without incorporating the intercity connectors and their relationship to the local network, a challenge that has yet to be taken up. The authors seem set to do hard-nosed analyses of traffic, accessibility, mobility and economic efficiency to strengthen the model so that it can supplant current –isms and be applied.

With three "patterns" on the table there is little excuse to handcraft picturesque solutions for a problem that has deep organizing dynamics. Centered on these models a new research focus may even give birth to a discipline – URBANOMICS – that deals with laws that drive and shape urban development.

The continuing absence of fundamental laws has left the field dependent on images that inevitably generate endless and tiresome imitation. The proposed model fills a gap and may rekindle not only elemental thinking but also diversity.

Descriptions of the latest and previous models can be found here: