When faced with the costs and logistics of rail, planners and city officials increasingly seem to favor Bus Rapid Transit (BRT), a trend likely to continue through the current recession.  But even with the many persuasive arguments for BRT, the nagging question remains:  why not rail?

When faced with the costs and logistics of rail, planners and city officials increasingly seem to favor Bus Rapid Transit (BRT), a trend likely to continue through the current recession.  But even with the many persuasive arguments for BRT, the nagging question remains:  why not rail? 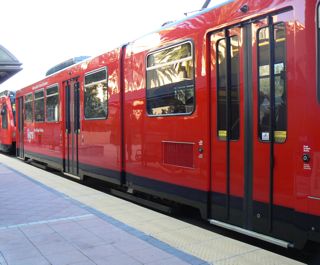 To be successful, a rapid transit system needs to be comprehensive.   Either a city is going to invest in comprehensive BRT (like Brisbane or Bogota),  a comprehensive rail network (like Toronto, New York, or European metropolitan rail systems), or a mix of rail and BRT.   The halfway approach doesn't do the job.

The limited experiments with BRT in the United States have so far amounted to "light rail lite":   single corridor bus lines that attempt to mimic light rail.  Transportation experts Alan Hoffman and Alasdair Cain argue that significant infrastructure investments - in the form of separated guideways called ‘Quickways' - are needed before American cities can achieve the ridership and efficiency of the world's best BRT.

Similarly, light rail ridership suffers because established networks do not yet cover enough ground.   In southern California, the Los Angeles Metro and the San Diego Trolley do not reach most residential neighborhoods, tourist destinations or satellite cities, let alone suburban job centers.  (The good news is that these systems are expanding, albeit slowly).  Rail stops can also be located in disconnected, unwalkable areas.

If a city is serious about mass transit, it will require substantial capital and a fairly bold vision to implement either BRT or rail (light rail or the uber-expensive heavy rail subway).  The most persuasive argument for Bus Rapid Transit is that it can be established more quickly and at lower cost.  BRT can also use existing automobile infrastructure like wide roads and freeways.  Furthermore, because buses are more flexible than fixed rail, they can leave the busway to access out-of-the way housing developments and office parks.   In other words, BRT better serves sprawl, which after all is what shapes most American metropolitan areas.

Still, for riders, skepticism about BRT persists.  Will it be as sleek and comfortable as a train?  Can one read on a bus, even a modern one?  Is the experience a vast improvement over a bumpy city bus? Will it be slowed by car traffic?  Given the infrastructure required for true BRT, why not simply pursue rail?  Elevated busways can look a lot like freeways – how will they affect neighborhoods?

If a modern rail system seems impossible, Toronto presents a good case for investment in higher quality rail, even if that means diverting funds from other modes (i.e., roads and highways).   The city opened its first subway in 1954, added two more lines, integrated subways with retained streetcar lines, and more recently supplemented with above-ground light rail.   It is not a coincidence that subways were expanded as several freeway projects were canceled.

So, transit riders and planners, for your city would you choose rail, BRT or a combination of both?