Human-scaled, creative development isn't getting built because most of the money in real estate comes from institutional investors that prefer predictable, large scale projects like subdivisions and strip malls, says Neil Takemoto of CoolTown Beta Communities.

Why is it that the vast majority of new development is at an institutional scale, and we don't see human-scaled fine-grained urban fabric, the kind that makes historic neighborhoods so desirable? Well, it's mainly because the vast majority of real estate development investment dollars come from institutional investors, and where does that money come from? Your pension and insurance dollars are sourcing this tremendous pool of capital that has to be invested somewhere. To those investment managers with billions to manage, why manage fifty projects if you can manage only ten instead? That simply means they'll prefer investing no less than $5 million at a time, which translates to $15 million projects. That precludes most every single human-scaled building you'd find, explaining why human-scaled neighborhoods weren't built since the 1920s, leaving only large-scale strip malls, subdivisions, office buildings

The thing is, the emerging you-centric market is demanding customized and personal, not mass-produced and commoditized. So how in the world is the supply of investment capital going to accommodate this? By focusing on the long tail - which is essentially anything and everything else that's a 'non-hit' or 'non-blockbuster', but in sum is greater. The good news is that it's inevitable - witness the rise of Netflix instead of Blockbuster; Amazon/eBay/iTunes instead of Wal-Mart; YouTube instead of TV, all of which focus on the thousands of individual niches of smaller interests that are in sum greater than the only the most popular interests. All that was missing was a reliable system of delivery. 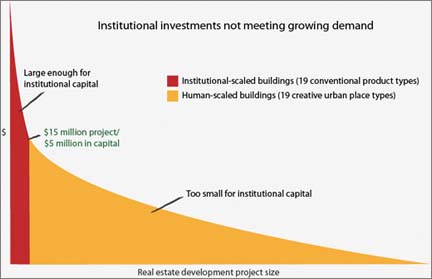 So, the long tail of real estate development - the $1 million to $5 million investments that none of today's major investors want any part of (just like the 42 million video titles Blockbuster won't carry) - will eventually inspire a system to invest in human-scaled buildings in human-scaled neighborhoods once again, just like Netflix devised a system allowing people to rent any one of those 42 million of ‘unwanted' videos. To get a better understanding of why real estate management isn't quite there yet, see 'Why placemaking isn't crowdsourced... yet.'

As you can see in the long tail diagram above, institutional investors aren't interested in development projects costing less than $15 million, which on average require about $5 million of their capital. When you're managing billion dollar funds, anything less than $5 million is too small. However, you can also see that the market demand in the growing knowledge economy is largely left out. Read about the 19 conventional product types of the industrial age vs the 19 urban development/place types of the knowledge age here.

In other words, while many of us would rather live in a multi-unit rowhouse type of building, our only choices may be apartment towers, because only the latter is big enough to finance in today's investment world. The tipping point is too high, and the result is a de facto built environment of monumental projects like you'll find at GlobeSt.com, the de facto real estate investment news site.

Hopefully sooner than later, but inevitably, the investment industry will cater to the long tail (ie the masses, or 'everybody else') and establish contemporary management structures that can handle a greater number of smaller development projects, as low as $6 million requiring $2 million in capital (ie a multi-unit rowhouse) - see diagram below. At the same time, crowdfunding will provide more financing options from the other end, letting the market finance their own preferences. That's when you'll finally see the 19 more creative urban development/place types define the new quality of life that creatives demand. 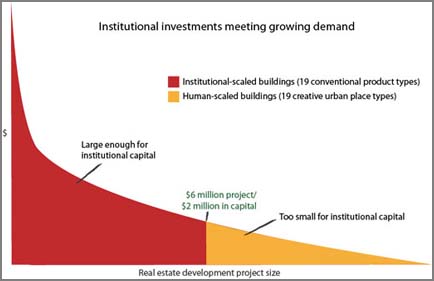 In other words, next generation investors will work with certified developers to buy several smaller buildings at once, provide them with progressive tenants upfront via such contemporary methodologies as crowdsourcing, and enjoy a much greater return (financially as well as socially and environmentally) than if they invested the same amount in one 'GlobeSt.com project'.

Neil Takemoto is the founding director of CoolTown Beta Communities, a crowdsource-based placemaking and economic development firm codeveloping natural cultural districts with creatives.See the original source for this article, Moving the tipping point for creative places, at www.cooltownstudios.com. Thanks to Jamal Williams of Red Dove for contributing to this entry.

The e-commerce giant has been quietly buying up massive swaths of property as the company works to reduce shipping times as dramatically as possible.