The Future of American High Speed Rail: Regional and Slow

<p> During his dramatic presentation <a href="http://www.whitehouse.gov/blog/09/04/16/a-vision-for-high-speed-rail/">last April</a>, President Barack Obama laid out a bold vision for high speed rail in America. Wielding a stylish red, white, and blue map (below) he presented the proposed corridors for new high speed trains. (Similar, if not identical, to plans long sitting on the shelf at the Federal Railway Administration.) He asked Americans to &quot;Imagine whisking through towns at speeds over 100 miles an hour, walking only a few steps to public transportation, and ending up just blocks from your destination.&quot; In reality limited funds, our dysfunctional planning processes, and the historical lack of investment in rail will mean the U.S. will most likely end up with a diverse collection of regional rail systems that may not go that fast.

Americans that have visited Europe or Asia have likely experienced modern high speed rail systems. France's TGV system, the product of decades of upgrades and improvements to the existing passenger rail system, now extends from the Chunnel to Marseille by way of Paris. Spain's rapidly growing AVE train network is credited by the Guardian with transforming traditionally provincial Spanish society with trains topping out at over 180 mph. China is famously pursuing an aggressive plan to expand their high speed rail network. Siemens considers the new service inaugurated between Moscow and St. Petersburg in Russia a testing ground for technology they hope to sell in America, which the Siemens spokesman quipped is "like a developing country in terms of rail" during an on-board interview with the New York Times.

Will our system look anything like these? The answer, as transportation wonks already know, is no. Even the $8 billion appropriated by the stimulus is a small portion of the funds required to implement even a portion of Obama's plan. This became painfully obvious at a briefing sponsored by the Rappaport Institute I attended recently, where Federal Railway Administration Administrator Karen Rae described how they viewed the $8 billion a modest sum to invest strategically in the rail network, sometimes for trains running well below Obama's 100 mph goal. She presented this sobering illustration of the historical investment in passenger rail, compared with other intercity modes: 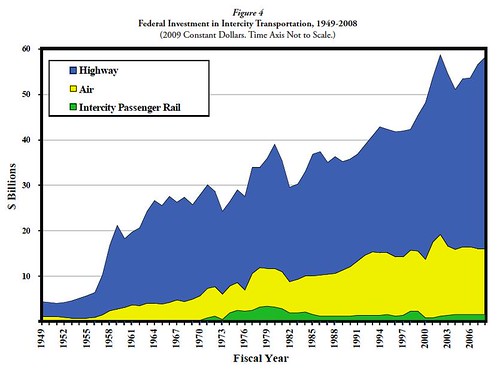 In fact, the High Speed Rail Strategic Plan released in April includes not only new high speed service with top speeds over 150 mph, but also investment in "emerging and regional" services with top speeds of 90-110 mph, and upgrade reliability and services on "conventional" intercity rail services with speeds up to 79-90 mph. In response to the ARRA call for proposals, the Federal Railway Administration announced in October they received an "overwhelming" 45 applications, saying they would delay announcement of winners beyond the announced goal of November to sometime "this winter."

What high speed rail should Americans expect? With significant bond funds approved by voters and serious planning underway, the California high speed rail plans seem a likely recipient of some of the funds. The Chicago region, with engaged stakeholders and a rich tradition of rail is another likely candidate.

Despite hopefully boosters, the other corridors, such as Pacific Northwest, Florida, New England, and Texas, seem less likely for high speed rail in the near future. Despite political leaders who don't want to be left out in cities in Arizona or Utah, Rae mentioned another important variable to a reporter in October: "We're not going to build rails to nowhere." In addition to having a local plan, high speed rail will work best when it can integrate with cities with well developed public transit networks at either end. Transportation planners know the "last mile" connections can play a critical role in determining whether riders will choose rail over other options -- such as driving or flying.

Ironically, the California system is demonstrating the biggest problems for high speed rail in the U.S. may not be our lack of technical knowledge but our troubled infrastructure planning and delivery system. Disputes about alignments in California have already spawned lawsuits. Maybe beyond ogling their trains, we should study how our foreign counterparts resolve conflicts about system design. In one case study I read about planning a TGV line in France, the government convened a "debate" bringing together the stakeholders before choosing an alignment or other technical details. In the U.S. on the other hand, government agencies act both as project designers and boosters, relegating other stakeholders to reactionary roles as outsiders who rely on lawsuits to pursue their interests. In addition, our government agencies are also lacking in competent planners and administrators who specialize in rail. In the end, dysfunctional planning processes and weak planning capacity may result in avoidable cost overruns. Overcoming these obstacles may prove even more challenging than finding the historically elusive political will.

A project that won funding from federal stimulus programs during the Obama administration is finally paying off on the Amtrak route between Chicago and St. Louis.