Census 2010: What's Happening Now and What To Expect

<p>One of the interesting parts of my position at the Boston <a href="http://www.mapc.org/" target="_blank">Metropolitan Area Planning Council</a> over the past year has been working with U.S. Census Bureau surveys and data. Since last September, this work has included preparations to ensure the region is prepared for the 2010 Census.<br /><br />Mandated by the U.S. Constitution to determine political representation, every planner knows the U.S. Census has become the single most important data source for studying American cities. The U.S. Census Bureau produces dozens of surveys, the Census held once every ten years is by far the most important. Many of the other surveys, as well as countless private sector studies and projections, depend on the decennial census numbers.<br />

Although counting the country seems like it should be a straightforward, although large task, in reality collecting the data is a highly complex operation. Since the 2010 Census will be different than the previous counts and planners will be involved in educating their community as well as using the resulting data, I thought I would summarize some of the key aspects of this important survey. 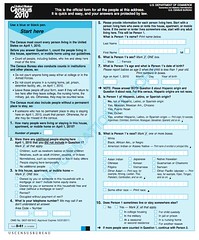 The U.S. Census will count every living person in the U.S. on April 1, 2010. Most people will be counted through a simple paper form that will be mailed to every residential address in late March 2010. (right) Households who do not return the form will be called or visited by a Census worker to collect the information. I recently met someone who erroneously assumed the survey would be online. In this all-online world, for the first time some Americans may be surprised to learn there'll be no way to get counted online, although the Census website does contain a wealth of information about the survey. All residents of the housing unit return one form with all their information on it.

People living in any institutional housing -- such as a jail, nursing home or college dormitory -- won't receive a form. They'll be counted through a survey submitted to the institution itself through the Census "group quarters" enumeration program.

The 2010 Census is very short, and contains just 10 questions:

Questions 5-10 are repeated for each additional person along with one of a number of possible relationships with the first person to fill out the form (including biological family, in-laws, roommates, or "unmarried partner.")

The simplicity may come to a surprise to many, including apparently U.S. Congresswoman Michele Bachmann who recently complained the Census was getting "personal." In fact the 2010 Census won't have the "long form," with detailed questions about transportation, income, and other topics. This part of the Census has already been replaced with a separate survey -- the American Community Survey -- which Bachmann may have been thinking of. This survey has already begun and will sample roughly 3 million households each year. The idea is that this rich detail will be available more frequently than in the past, and make the decennial Census simpler for people to complete.

The U.S. Census Bureau has already opened early local Census offices throughout the country to manage the address canvassing operation that was just completed, operated in addition to their permanent "Regional Census Centers." This survey collected the geographic location and address of every housing unit in the country. In the fall, the Census Bureau will open all local Census offices, and chances are one will be near you. As an example, Massachusetts will have 11 offices. The major hiring push for all the census workers to go door to door will happen next January, around the time the major media push will begin to educate people about what to expect. The Census forms and most enumeration programs happen from mid-March through July.

At MAPC, some of the most common questions regarding the Census we get are regarding language and citizenship issues. The 2010 Census does not ask about citizenship. The only personally identifying information is listed above -- it does not include social security number or any other ID number. In fact, Census data is specially protected through Title 13 of the U.S. Code, and the Census website describes their many privacy restrictions. In my opinion, the truth is that the Census data is safe because law enforcement authorities today have a variety of sources of much more detailed data, including private-sector data, conventional warrants, and the Foreign Intelligence Surveillance and PATRIOT Acts, ICE home and workplace raids, etc.

Languages is more complex. I was surprised to learn recently that more than 30% of households in Boston speak a language other than English at home (over 19% nationally). The official form will be distributed in two forms: the all-English form, and a bilingual English-Spanish form distributed to Census Tracts with greater than 40% Spanish speakers. However, the materials mailed to everyone include information in five languages about how to get materials that show a translated version. Residents still have to copy their responses onto the official English form. Additional materials will be available for five "big" languages: Spanish, Chinese (simplified), Korean, Vietnamese, Russian. For these languages, the Census will produce language identification flash cards, and have a hotline staffed with bilingual operators. Language assistance guides in 59 languages will also be produced, but they won't be as widely distributed as resources in the five primary languages.

However, our local Census office has been working hard to hire people with knowledge of locally prevent languages, such as Portuguese, which is more commonly spoken than Spanish in Massachusetts. These regional offices will have discretion to ensure they have materials and people with language skills needed in their region.

Reaching the 'Hard to Count'

In the blunt terms of the Census Bureau, people who are hard to track down are "hard to count." The Census will have a number of components to count people who can't, or won't, respond to the forms, visits, or calls.

First, a number of special populations are counted differently than everyone else. The group quarters survey was already described above - these people are counted through their institutions submitting data. In addition, the homeless are counted at "targeted non-shelter outdoor location," shelters, soup kitchens, and mobile food vans. Other people, who many not have a permanent residence the Census can mail a form to, will be counted at RV parks, hotels, marinas, circuses and carnivals. Places with large percentage of vacation homes aren't mailed forms, instead canvassers go door to door to count residents. (In Massachusetts, that includes parts of Cape Cod.)

Finally, low-income, immigrant, and high-turnover neighborhoods will be hard to count no matter what techniques are used. For these areas, Census is relying on a combination of manpower and local assistance to build goodwill and trust with the local residents through their Partnership and Complete Count Committee programs. They're also producing school lesson plans, with the hope that children may be a good way to educate parents.

Over the coming months, the amount of information about the Census will expand as media coverage and outreach efforts ramp up. Although most will focus on Congressional apportionment and their use to allocate tax dollars, urban development professionals know the statistics will be used for market research, urban plans, and academic research for decades to come. Although the Census Bureau will mount an impressive "operation" next spring (their word), the quality of the data will ultimately depend on the participation and care of millions of Americans. For more informaiton, in addition to the official website, the recent "Data Day" conference I helped plan at MAPC featured several sessions on Census 2010 and finding and using Census data more generally.

Readers who want to discuss more technical issues such as the spatial accuracy of TIGER line files, inputs in the Master Address File, or the Participant Statistical Areas Program (adjusting tract boundaries) are welcome to post a comment below.

Technological issues with the handheld computers to be used in the U.S. Census Bureau's 2010 Census have frustrated officials and have them considering a plan to return to the traditional paper and pencil counting method of years past.