The MTA As Stealth Development Agency

With the passage of Measure R in November, the voters of Los Angeles County determined to set aside $40 billion for mass transit, including that longest-simmering of metropolitan infrastructure dreams, the "Subway to the Sea."

The route and station stops for the Subway to the Sea have yet to be determined, although the front-running plans are westward extensions from either the Wilshire-Western subway stop, underneath Wilshire Boulevard to the sea, or from the Hollywood-Highland stop, tunneling west below Santa Monica Boulevard.

The Subway to the Sea will no doubt become one of the most memorable mass transit projects of the era-and yet it is also something much larger: A once-ever opportunity to responsibly boost and channel real estate development through the Westside, creating a connected, less-congested and breathing city. The Subway to the Sea has the potential to be not only tunnel and trains, but rather a necklace of urban jewels, known more prosaically as 'transportation-oriented developments,' or TODs.

Though thought of as a transit agency, the Los Angeles County Metropolitan Transportation Agency (MTA) - builder of the Subway to the Sea - is actually the region's stealth developmentagency, much more powerful than any other entity that bears such a title. Unlike other development agencies in name, the MTA can not only determine subway stop locations, but then can strongly encourage large-scale real estate development on and around subway stops-which is exactly where future construction should take place.

Scarcely known to the public, or even local urban planners, is the fact that the MTA has the power of eminent domain, in addition to its legal authorization to buy land. Indeed, not only does the MTA obtain land for subway stops, it must buy surrounding parcels for 'staging areas,' so that the heavy work of building underground can proceed. These staging areas become surplus when the subway stops are finished, creating a perfect opportunity for dense, omni-use development. The MTA, in fact, has already proceeded down this very course by undertaking 'joint development' on MTA subway properties, most notably the huge Hollywood/Highland mall - the star-crossed yet still catalytic and successful development in the revitalized Tinseltown - and also at its Hollywood and Vine stop. 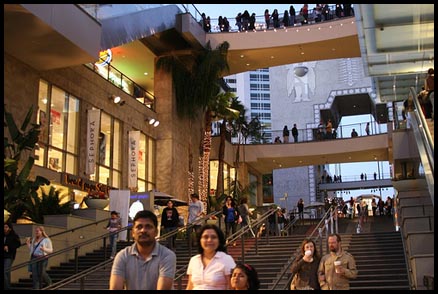 The Hollywood and Highland mall, featuring a subway entrance and the Kodak Theatre.

The exciting reality is that the MTA must do more of the same on the Subway to the Sea, but on an even larger and more sophisticated scale. In assembling land parcels for the project, the MTA might do well to overshoot, and buy more rather than less. Then, working in concert with private developers to better assure market validation, the MTA should move forward with dense, mixed-use TODs, creating lively, breathing, vital 'urban villages' or 'mini-cities' around each stop.

Ideally, such subway neighborhoods should be somewhat self-sufficient to encourage walking-having such amenities as grocery stores, dentist offices, paseos and libraries-but also be inviting to surrounding streets. National design competitions should be held for each subway neighborhood, to help assure that evocative or iconic architecture rules the day. It is liberating to consider that among its many strengths, Los Angeles has a complete lack of suffocating context-any architectural style could fit in West Los Angeles, from Streamline Moderne to Tuscan. Imagine a string of subway neighborhoods, each remarkable for its beauty, vitality and functionality. What is truly remarkable is that with the passage of Measure R, such a vision is not so utopian as practical, possible and necessary.

Subway neighborhoods would not only provide homes for the inevitable growth in Los Angeles' population, they can also relatively reduce traffic-the greater the number of subway neighborhoods, the greater the chance a resident can become a commuter who rides the subway to work, a reveler who visits nightspots in the evening by the tube, or a parent who takes the family to the beach by rail come Sunday.

With the Subway to the Sea, we can make Los Angeles a better city to live in, reduce congestion and pollution, and help preserve and enhance property values. It is a time for bold visions.

Ernesto Vasquez, AIA, Vice President and Partner of MVE & Partners, believes that smart and beautiful architecture improves the urban environment and provides transcendent experiences for metropolitan denizens. Among many other projects, Vasquez designed Fruitvale Village, a transit-oriented development on a BART stop in Northern California. Vasquez holds a Bachelor of Architecture degree, with honors, from the College of Architecture and Environmental Design (CAED) at California State Polytechnic University, San Luis Obispo, where he is a member of the CAED, and has served on the President's Council.

Jeff Mayer, principal of Irvine-based MVE & Partners, is also the current Chair of the Orange County District Council of the Urban Land Institute (ULI). Mayer is widely recognized for more than 30 years of accomplishments in the architectural field, including master planning, strategic planning, feasibility analysis, entitlement planning, interiors, entertainment design and and "edutainment" architecture. Mayer earned a Bachelor of Science in Planning and Landscape Architecture from the University of Virginia and completed graduate work at the Wharton School of Finance at the University of Pennsylvania.