In The Name Of 'Community'

When it comes to redevelopment, many architects, planners and developers like to talk creating a sense of 'community'. But glossy plans and new buildings generally do little to strengthen an area's 'social' fabric -- rather, it often can cause the reverse.

Imagine reading a fantastic novel. You are so immersed in the story that you suspend disbelief, allowing the fiction to become real. Although many readers can relate to this experience, very few would go so far as to rewrite the novel and narrate themselves into it. However, our attachment to ideas of 'community' and the way it is narrated (by ourselves or others) has led many of us to a similarly strange process of narrating communities without always analyzing the fiction we've created.

The term 'community' means different things, but a frequent usage assigns to minority and low-income neighborhoods a state of organic/pre-modern togetherness rarely attainable in middle class suburban neighborhoods, and equates various socioeconomic problems of the inner-city with the loss of that presumed togetherness. As such, 'community' becomes an amorphous criterion for measuring working class neighborhoods. This repressive approach to defining community not only creates undue pressure for the maintenance of organic relationships, despite changing political and economic processes, but it also becomes an instrument through which the fiction of bygone communities is used to justify a number of 'area-based' policy and design interventions intended to 'fix' neighborhoods or build 'communities' where they have ceased to exist or have never been. Recent development efforts in downtown Los Angeles provide a great example of this misplaced approach to community building.

In an April 25, 2006 article in the New York Times, Frank Gehry, the iconic architect whose haute couture buildings become instant landmarks, was quoted as saying that his goal for the Grand Avenue project-- a $2 billion planned mixed-use development adjacent to the Walt Disney Concert Hall in downtown LA -- was to create "the beginning of a community that has the body language of a community and has the scale of a community." Mr. Gehry is not the only one to use the word 'community' to indicate a togetherness that is yet to come; a number of new housing developments include it as part of their marketing strategies. Used this way, 'community' becomes the by-product of a particular design and urban form: an imagined apolitical architecture and urban design rescuing "downtown" from all its ills -- never mind the overt capitalist process that created these conditions in the first place.

Of course, this is not the first time that the built form has been equated with a better society: the entire modernist project was about creating 'togetherness,' 'peace,' and 'order' worthy of modern nations. From the grandiose ideas of Etienne Boullée to the International Style and Le Corbusier, we have witnessed many aesthetic responses to sociopolitical issues. The audacity of the new round of development, however, lies in the grandness with which it hijacks the word 'community' to mean safety, self-contained buildings, and provision of every amenity. This use of the word 'community' sends the message that these developments are fortresses of safety in a wilderness of dangerous possibilities -- that they are 'ordered communities' within disorderly places.

The promise of 'communities' yet-to-come must be particularly offensive to people who pre-date incoming developments. What is the 'beginning of a community that has the body language of a community?' Does this imply that the current neighborhoods in and around downtown Los Angeles lack such a 'body language'? 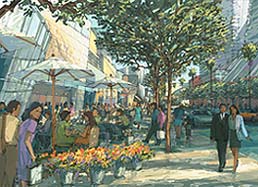 A rendering of the streetscape for the Grand Avenue Project.

In 1990, downtown Los Angeles area -- bounded by Temple Street to Interstate 10 and the 110 Freeway to Alameda Avenue -- housed nearly 26,000 people, 12,000 of whom were Latinos. Non-Hispanic Whites, African Americans, and Asian Pacific Islanders (APIs) numbered about 5,000, 5,500, and 2,800, respectively. By 2005, when various ideas for the new downtown had found support among developers, politicians, designers, and planners, the demographic landscape had already shifted. The estimated population of the area had reached 35,000. While little had changed in the magnitude of the non-Hispanic White population, there were now slightly more than 15,000 Latinos and approximately 7,400 African Americans and 7,200 APIs living there. The area's population grew by about 9,000 people, the majority of whom were non-White: if this had occurred without major developments, for whom were (and are) the new developments being built? Furthermore, by what measure did the existing residents lack a sense of community?

The interest in downtown development may be based on the fact that more people work than live in downtown Los Angeles. The same 10 census tracts discussed above attract over 200,000 employees. Developers dream of luring these urban nomads to their aesthetically conjured up gemeinschaften. But a move downtown will depend on whether workers can afford high-priced condos. If the new development in downtown L.A. continues to build for and subsequently attract 2-person families and singles, the new developments will be only as successful as the workers' job security and their lack of desire for children, whose presence would require larger homes and good schools in the area.

It is through the continued acts of living together and interacting that communities are created. The word 'community' cannot be presupposed for any new development. Will the proposed developments create new communities? Only the future can tell. However, it is likely that the so-called private-public partnerships will spend quite a bit of public money in pursuit of new development and watch the loss of existing communities. In 'taking their places' and narrating new populations into existing community stories, we will end up creating aesthetic responses that will become monuments to our obsession with 'fixing' capitalism with capitalism -- a strange endeavor in the name of 'community'.

Ali Modarres is the Associate Director of the Edmund G. "Pat" Brown Institute of Public Affairs at California State University, Los Angeles and a Professor at the Department of Geography and Urban Analysis on the same campus. His co-authored book, City and Environment, was published by Temple University Press in 2006.