A Browner Shade of Green: The New Water Rules and the Next Chapter of Sprawl

Quick -- what has been the most influential planning phenomenon over the past decade? While many planners would speak to the Kelo decision, or the planning efforts underway in the Gulf Coast, they don't even come close to this one: the Post Construction Minimum Measure under the 1999 National Pollutant Discharge Elimination System second phase for Municipal Separate Storm Sewer System.

Okay, so it doesn't exactly roll off the tongue or make for a memorable title slide, but by now, planners in over 6000 cities and counties around the country have encountered these new rules, which address the impacts of stormwater runoff from new development and redevelopment projects.

As a short review -- the impacts of urban runoff typically fall into three categories. First, there is quantity, which has traditionally been called 'flooding'. The second, runoff quality, affects water resources when stormwater flows over polluted surfaces, carrying excess nutrients, pesticides, oil, trash, and whatever else can be dislodged and carried into local streams, lakes and estuaries through pipes, curbs and gutters. The third category is somewhat new: flow rate. Fast-flowing water scours streambanks and causes erosion, further degrading habitat and drinking water resources.

To understand why these regulations are so powerful, it is instructive to look back at a study conducted by the Center for Watershed Protection from the mid-1990s. The study looked at why watershed plans fail, and concluded that one big reason is that most protective practices rarely made it into the language of local codes and ordinances.

It seems somebody at EPA read the study, because in 1999, the aforementioned stormwater regulations came out, and in a nutshell, require states to develop runoff management rules for development and redevelopment projects. Under these rules, localities are required to enact management practices at the local level "by ordinance or other regulatory mechanism." The EPA regulations listed many possible strategies, from site level infiltration to infill to regional land conservation. These regulatory and code changes are occurring now both at the state level and in cities that meet the population and density thresholds for regulation.

In the push to "green up" local codes, stakeholder groups have a wealth of new techniques, from conservation design to green building techniques. As the new regulations take shape, the folks delivering open space zoning, swales and cluster subdivisions could also bring us something else: a new wave of sprawl.

Sprawling patterns are often blamed, in large part, on the fact that new development is almost universally easier to undertake than redevelopment. Unfortunately, the new rules are being written in a manner that tilt the playing field even more by making infill and redevelopment harder while making new subdivisions easier and cheaper.

How? A combination of circumstances is forming the policy environment:

It sounds good, but does it protect the environment? That answer is less clear. Perhaps the most important aspect of modern watershed health would be a seventh addition to the list above. Most impacts from urban runoff are generated from existing development that is not poised for redevelopment activity anytime soon. While there is a lot of environmental hope placed on the new regulations, truth is, better stormwater practices don't kick in unless a construction permit is pulled. 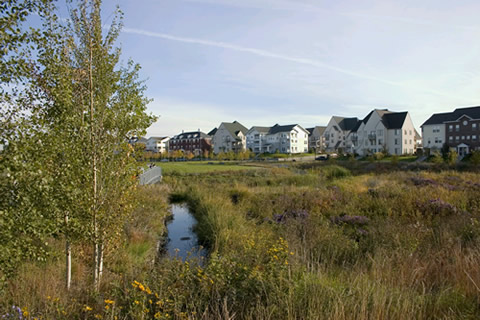 It is also important to understand, from an impaired watershed's point of view, any improvement from the construction permit system will only occur when impervious surface is converted to pervious parkland or landscaping. For new development, the engineering equation only gets you a natural version of status quo.

But, it's a questionable status quo. Remember that the engineering equation only looks at the developers' site plans and what happens on individual private sites. In undeveloped areas, one of the easier ways to meet the "meadow" requirements is to simply buy more land for soaking in runoff. But this expands the public imperviousness of roads, transportation access and other infrastructure to meet bigger lots. This infrastructure also extends to the new subdivisions, which are now more attractive to builders since the trend in local rulemaking eliminates costly sidewalks and much of the roadway through lot clustering. Envisioning the natural benefits of a couple of conservation subdivisions is rather uncomplicated, but can we really house millions more people, jobs and services under engineering specs that swear the landscape won't notice the bulldozers?

The new stormwater regulations have not, unfortunately, spurred a more in-depth look at what drives vast expanses of dispersed development in the first place. Instead, the 250,000 square foot retail store and its 800 parking spaces are given an equation to meet with the use of bioswales, green roofs and porous pavers. Because we are allowing the sum total of environmental protection to be reduced to a "post versus pre" hydrology equation, the official low impact or sustainable seal of approval may be giving a false sense that all the other environmental and community impacts are low as well.

If the environmental evaluation for new development were not complicated enough, looking at redevelopment under the new regulations is even tougher. As noted above, under the stormwater permit rules, converting imperviousness is really the only path to improvement, and the redevelopment permit counter is the gate.

But the clean-up relies on one important assumption: that the redevelopment even takes place. While it's easy to visualize platinum LEED glamour buildings in downtowns and along waterfronts, the more important reuse will occur on the vast slabs of certifiably unglamorous "grayfields" that cover urban and suburban landscapes alike with vacant storefronts and empty parking spaces.

This raises a couple of questions. First, if local governments are having a hard time attracting development to these vacant sites now, how are strict rules that make redevelopment even more expensive and difficult going to help? The new rules, if anything, may tip the decision towards building rehabilitation, which does not trigger stormwater improvements. For redevelopment, there is a regulatory sweet spot: pushing for as much on-site stormwater management as possible without tripping decisions that result in no improvement at all.

Looking at it from the watershed's point of view, can any new development claim to be green if there is already developed land available to absorb development demand? When it rains, the watershed pays twice -- once for what flows off the vacant property and again from the new development and its newly-poured public infrastructure (not to mention the chain reaction of imperviousness that occurs once new rural residents begin to demand familiar urban services). In this case, shouldn't new development actually be required to do more than meet the "meadow" standard?

At this point, stakeholders with an environmental angle are likely to be thinking -- "but we do support redevelopment." To be sure, most environmental groups have text on web sites that sing the praises of redevelopment for the environment. But, it seems like the hymnals at "Our Lady of What's Good for the Environment" don't always have the same pages.

For example, here in Sarasota, the Sierra Club recently backed a candidate for his stance against development that encroaches into residential neighborhoods. While the successful candidacy was spurred by reaction to several garish buildings, voters are likely to read the election results as a repudiation of the city's infill plans to bring in a better use and transportation mix. The green candidate in Arlington, Virginia assails the "overdevelopment" of the Rosslyn-Ballston corridor, even though the five-station metro corridor is hailed worldwide for its environmental performance. By one account, the development on this 3 square mile stretch would cover 12 square miles if built under modern, suburban standards.

The Rosslyn-Ballston example brings up perhaps the greatest disconnect exposed by the new water rules. Each property in the corridor is designed with an eye towards intensity. Thus, each tall building covers almost the entire site. So under the site level footprint model, the building looks "bad," even as thousands of square feet worth of demand for office or living space has been absorbed on a very small footprint under one roof on a site that was already impervious.

Conversely, Maryland has five categories for stormwater credits, the most impressive-sounding being "Environmentally Sensitive Development." But the qualifications are limited to houses that only cover 15% of the site on at least two acres or clustered housing in subdivisions. The signals here are astounding. Sprawling McMansions can easily rate as "environmentally sensitive" while mixed-use, compact designs, touted by the Department of Planning as best for the environment, don't even make the cut.

So what is the planning community to do?

None of these can take place unless those of us who understand the complexities of zoning get together with those who understand the complexities of cleaning up the environment. A national discussion needs to take place, and soon, on not only the components of stormwater management, but a frank conversation on what sustainable development looks like -- from the watershed's point of view.

Lisa Nisenson has over 15 years experience in smart growth, with a unique combination of experience as citizen planner, federal policy analyst, researcher and writer. Her current work focuses on integrating new stormwater requirements with land development ordinances, in particular for redevelopment and smart growth plans.