The American Institute of Architects recently threw its authority behind a list of America's "favorite architecture," ranking three centuries of indigenous design one to 150 specimins. The resulting menu, culled by survey, of buildings, bridges, monuments, and other solid things amounts to a joyous celebration and a remarkable commentary on America's embrace of beauty. It also reinforces the desperation that arises when aesthetics and nationalism mix.

The American Institute of Architects recently threw its authority behind a list of America's "favorite architecture," ranking three centuries of indigenous design one to 150 specimins. The resulting menu, culled by survey, of buildings, bridges, monuments, and other solid things amounts to a joyous celebration and a remarkable commentary on America's embrace of beauty. It also reinforces the desperation that arises when aesthetics and nationalism mix. 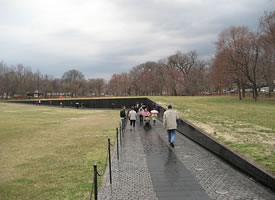 I have my opinions on the potency of the Empire State Building (1), the sublimity of the Vietnam Memorial (10), and the disappointment of Disney Hall (99), but no matter. Those we can argue over demitasse. Before we go romping through architecture's greatest hits, it's probably worth asking, why do we recognize individual architects and individual works? And why do it in a country so awash in mediocrity?

Surely individuality has its place. Yet the stark itemization in the AIA's list puts buildings at a remove that betrays architecture's twin obligations to function and place. Architecture surely involves artistry, and art naturally owes itself to heavy doses of genius--plus equal measures of determination, arrogance, and wherewithal (Daniel Burnham, anyone?). But even the newest shock relies no less on history, fashion, politics, and the countless footfalls of the everyday. In architecture, that relationship-between creativity and influence-is no academic matter. Any architect who pays no mind to the material and ecology that swaddle his buildings should learn to sculpt and be done with it. (Only churches deserve absolution for attending to only their own form. The others do so only at risk of sacrilege.)

Recognition of buildings-even in the form of something as intentionally vague as "national favorites"-is different from, say, honoring the Best Actress, whose recipient will live again in another film. The best structures are, in many ways, the least available to evaluation because each is wholly unique, if not in form then in location. Among all the arts, only architecture defies Walter Benjamin and his duel between aura and machine (more about him some other time). As long as the continents stay put, structures will always keep their auras close at hand and owe themselves to forces beyond their walls. Would Grand Central's (13) magnificence grow dim if it moved to the edge of Kansas? Hardly. Against the dark prairie it would be stunning beyond measure. But unless 200,000 stock brokers show up for the 17:50 to Emporia, its displaced grandeur might draw a few tourists, but it would not qualify as architecture. 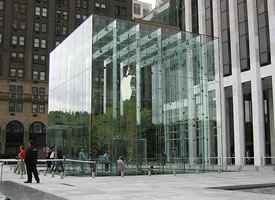 Surely the voters did not disregard the buildings' relationship with their "context" (I tried to avoid that word, an abstraction so blank as to suck meaning from the others around it). I trust that their votes did in fact spring from experience and that many of their selections revel in the neighboring pavement, people, alleys, and structures, either by elegant blending or brash contrast. In fact, most of them--the Ahwahnee (26), Monticello (27), Wrigley Field (31), Falllingwater (29), the Golden Gate Bridge (5), the Apple Store (53)--do just that. (The Williams Tower (139) and the Dolphin and Swan Hotels (70) are another story.)

But by venerating only isolated creations and creators, the list reads like the manifest of an overloaded civilization; no mind can scan it and continue to behold the infinite features of a full landscape. As the light of the imagination contracts, blinking on each name, one by one, the streets empty out, the background dissolves into corners of the evening, and only impressive hulks remain. No coziness in this land of big skies and broad shoulders.

However the AIA promotes its craft and serves its country, architecture ignores the larger world only at great peril. The critic or layperson who fawns at Calatrava's swoops (59), the Atlanta Hyatt's atrium (103), or the Chrysler Building's hat (9) without also deciding whether those buildings enliven the populace, debate history with its neighbors, or otherwise tugs humanity forward perpetuates the cycle of obliviousness that has infected the pathetic array of buildings--office parks, tract developments, and other quasi-fascist clutter--whose designers commanded neither skill nor care nor intellect. 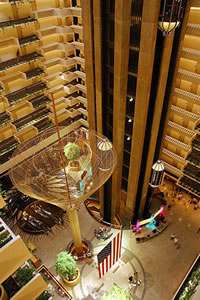 To reward only artistry, to the point where we assign it to so many lumps of contrived grandeur (12), denigrates the places in which people actually live and promotes a spirit of detached awe that undermines the chance to improve them. Lest anyone forget, the AIA is a professional organization (unlike the Project for Public Spaces, which, in libertarian fashion, represents no one in particular), and most of its members, dream though they might, will fall far short of any future iteration of its list. The average architect, professional or otherwise, stands a better chance of improving the world by looking to the anonymous bricks of Paris (or even downtown Emporia) than by striving for immortality a hundred stories in the air. Even if great (or even good) works are in short supply, at least irony is not.

If the fans and practitioners of architecture are true to demographics, most of the people who read, voted for, and daydream about those 150 live nowhere near the structures that so warm their hearts. The median will sit at their computers and scroll down the page in flat jurisdictions like Riverside, Plano, Cary, or Littleton; Gilbert, Shaker Heights, or West Chester, with not a landmark, or even a Main Street, in sight. To them, the list lends inspiration and perhaps comfort, as if just knowing that they are out there somewhere within America's bounds makes it all right.

Indeed, it is easier to marvel at something unique than long for something common that you simply don't have.