What better way to envision the future of a city than with a cartoon?

Nate Berg | March 21, 2007, 12am PDT
Share Tweet LinkedIn Email Comments
What better way to envision the future of a city than with a cartoon?

But before you write this off as the "I like cartoons" blog post from the youngest Interchange contributor, consider that the market for urban planning visualization has seen a huge surge in recent years. Advances in technology have made it much easier to show communities and clients what a new town center may look like, or how transportation patterns might be affected by new public transit infrastructure, or what would happen to a coastal town when the ice caps melt. Interactive mapping tools such as GIS, CAD, SketchUp, Google Earth, and other 3D modeling programs do what planners in a town hall just can't: they literally show people what's going to happen and how it's going to look.

Essentially, urban planning visualization is a cartoon about planning -- only it's boring. Why not embrace a medium that can clearly show how a plan will unfold, what ramifications it will have and how the target area will change if it is enacted? And why not utilize an outreach technique that is not only accessible, but also appealing?

Cartoons -- or "animated visualizations" if we want to sound professional -- can be one of the most powerful tools in explaining what planning hopes to achieve.

Here are some good examples of how the fine art of animation can be used to effectively visualize planning.

"New Town" is the story of city dwellers who got fed up with their long commutes, polluted air, and lack of open space. As one resident says, "Our town has turned into a monster!" And while they almost bought the idea of increasing density in their existing city, the residents decided to move out and form a new town.

The cartoon cautions that planning for a new town is a big decision, and requires a lot of foresight. It effectively uses animation to show how the first city formed and became what so many of the residents despised. Likewise, the cartoon also shows how the new city could be formed to avoid the problems of the past.

Our friends at archive.org bring us this animated short from 1948, produced by the British government's Central Office of Information -- a public service announcement (read: propaganda) producer, much like the American Ad Council. And while the new town the residents decided to build includes a mix of uses, housing types, open spaces, and local jobs, it also demonstrates the widespread mid-20th century attitude about getting out of the crowded cities and starting fresh in a new suburb, with more space and more freedom. 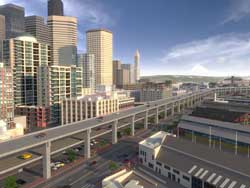 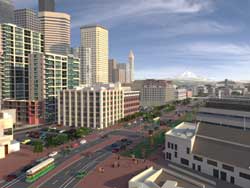 Two animations from the City of Seattle, the Washington State Department of Transportation, and the Federal Highway Administration are less exciting, but do a great job of explaining a planning issue. They show two alternatives for replacing the city's crumbling inner-city elevated freeway: one a rebuild, the other a tunnel. While a little less endearing than the "New Town" cartoon, these animations clearly show what the city and the two options would be like if approved and implemented.

And at the far end of the spectrum, way past the deliberate educational animations about the two Seattle plans, and more to the "tainment" side of the infotainment of "New Town", there is "Metropopular" -- a cartoon about a popularity contest for cities. This cartoon looks at some of the best and worst characteristics of American cities, from the cities' own perspectives. It's pretty funny. And though it doesn't quite illuminate the value and purpose of planning in any enlightening way, "Metropopular" does do a good job of examining the character of cities and how they are perceived.

These are just a few of the ways animation and cartoons can be used to explain planning issues and concepts. I think they show that it can be a very valuable tool to get the people's attention and get the point across.

If anyone knows of any other good planning-related animations or cartoons, my friends and I at the kids table would be happy to watch them.