Too High a Density Can Also Promote Sprawl

Densification is often promoted as a solution to sprawl, but too much density too quickly can also backfire. Adequately implementing a smart growth strategy involves positive publicity, family-centric environments, and motivated developers.

Ottawa, Canada's capital, is a city of nearly a million people that recently amalgamated with its suburbs. It has adopted a Smart Growth agenda through which it hopes to build up to 60% more units with no expansion of its urban boundaries, and imposed strict restrictions on new infrastructure other than transit and the new mixed use centers. Having agreed to Smart Growth, suburban council members have since been voting to put most of the new density into already high-density older central neighborhoods.

This causes more sprawl as young families in compact neighborhoods flee the vicinity of new highrises and escape the higher taxes that result from the upzoning. The counter-intuitive effects of building more units are difficult to communicate to those who set zoning, so a Smart Growth agenda can easily backfire and destroy the higher-density neighborhoods that work, without creating any new ones.

If you implement Smart Growth, here are tips to avoid making these mistakes:

1. Amalgamate
If the location of the growth affects a municipality's budget, then it is difficult to direct growth to where it makes sense and to reduce restrictions on land use.

3. Don't count on developer-initiated rezoning
If you just wait for developers to ask for rezoning, you will get mostly spot zoning of valuable high-rise lots near downtown. The economics of fighting opposition from neighbors is not worthwhile for cheaper projects, yet it is the infill projects, where the rezoning required is smaller lot size or change of use, that achieve Smart Growth objectives. Work with communities on a complete plan which promotes more compact forms and then respect it; don't have a hidden plan that is revealed to them one rezoning at a time.

4. More housing density does not mean more population density.
I live in the highest-density neighborhood in the city but it is far from the highest dwelling density, mostly because of the larger household sizes of families with children. Above a certain density, increasing the number of units does not increase population. As you increase housing density by building apartments, fewer of the newcomers have children. Increase further, and the families that were there start to leave, and more buildings become unoccupied or under-occupied. This happens both at the neighborhood level and in the block surrounding an apartment building. Once these families move away, they won't settle for compact housing any more. 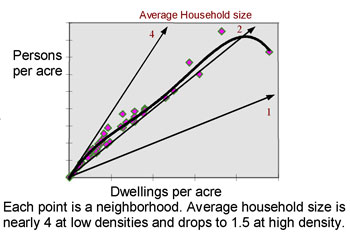 5. Family housing, not apartments, is key
An analysis of densities in our city shows that the amount of land consumed per apartment dweller does not depend significantly on the distance from downtown. It affects how much the apartment dweller is willing to pay, but not total land requirement. The same can not be said for single-family units. Families in higher-density central neighborhoods use less land and have a comparable housing cost. Where families live makes a huge difference in reducing total land use. When the proportion of families in an area falls below a critical point, you face a demographic change that replaces large households with small ones. Older houses can be converted to adapt for a generation, but building modern apartments will make that change irreversible.

6. Turn to smaller builders
The few large builders that fueled greenfield development in your city are not necessarily the ones who will do the bulk of the Smart Growth building. Their economies of scale and financing abilities can adapt to large apartment buildings but for the large number of small infill projects on which Smart Growth relies, you will have to deal with a larger number of smaller players.

7. Maintain good models of higher density at all income levels
Most of Smart Growth is marketing - creating or rediscovering a demand for more compact forms. People must be able to relate to an existing model in their own city, a place where they can imagine living. It is important to keep these models attractive, with good schools, parks, and little controversy about the negative effects of higher density. Gentrification alone won't do it because it benefits one income group at the expense of a larger group.

8. Don't turn supporters into opponents
People in neighborhoods near downtown tend to support Smart Growth. But if you place a disproportionate share of the burden on them, you will lose their support. What's more, you will make higher density look like something no one wants, not a positive improvement to livability. When you negotiate six stories with a community, don't give them nine. If they agree to a transit corridor, don't then spring even more density on them. Know when to take your winnings and back off.

Martin Laplante is Director of Planning and Development of Action Sandy Hill, a volunteer community association in Ottawa, Canada, and is one of the founders of Citizens for Responsible Urban Planning. He his also Vice-President of RES Policy Research, an Ottawa- based company with many years of history in artificial intelligence projects including expert systems.