The Leaning Tower of Dallas Is Too Good for This World

Opinion: Climate Change Has Brought the 'Era of Extreme' to the Great Lakes

To correct misimpressions and misunderstandings, it is necessary to comment upon a Planetizen blog summarizing a scholarly article examining the environmental merits of conservation subdivision design. Having coined and defined the term “conservation subdivision,” described in two books and one peer-reviewed paper, I read with interest both the blog and the longer article (which referenced me or my books 14 times).

First, it is important to explain that these books focus almost exclusively on development approaches in the lower-density rural fringes around metropolitan areas, where the municipally established density is typically two or more acres per dwelling. Accordingly, the environmental benefits described in these books, which the article cited many times, are keyed to conservation design in these lower-density rural areas, not to sewered areas where densities are typically at least six times greater (3du/ac versus 2+ac/du), where there is correspondingly less design flexibility to achieve high open space ratios. Although reducing lot sizes there and designing around a variety of natural and cultural features can markedly improve results in such situations, those higher-density examples are not described as conservation subdivisions in the books repeatedly cited in the article (Conservation Design for Subdivisions and Growing Greener). 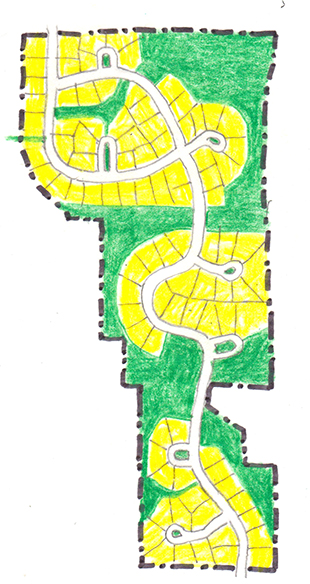 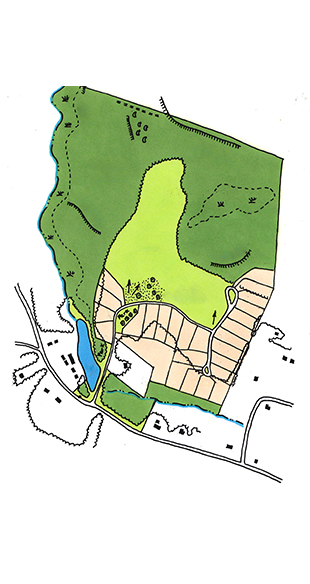 Figure 1: The study sample of 54 developments mixed together developments with widely varying open space percentages. The differences in the amount of land being preserved affected the study’s findings and conclusions, which were intended to measure the environmental merits of conservation subdivisions. The sample’s higher-density suburban cluster developments with public sewer and relatively low open space ratios (such as High Ridge, left) caused the study to become skewed, producing results that do not accurately reflect the superior environmental performance of rural low-density conservation subdivisions, such as the Fields of Cold Harbor in Hanover County, Virginia (right). The Fields of Cold Harbor subdivision successfully preserves farmland, wooded wildlife habitat, and Civil War earthworks.

Unfortunately, the article is seriously flawed because it combines and conflates three related but entirely different kinds of subdivision design: clustering, PRDs, and conservation design, all of which are built at significantly different densities. The third, conservation design, is distinguished from the others by several criteria. Among them is a far higher percentage of open space (typically 50-70%), wherein at least half of the unconstrained (buildable) land is set aside as permanent conservation areas.

The developments analyzed in the study included 54 subdivisions located west of Milwaukee in Waukesha County, in which the proportion of preserved open space ranged from a low of 16% to a high of 80%, Those at the lower end of the scale were obviously basic clusters and PUDs, different in almost every way from the true conservation subdivisions at the upper end of the range. Very few (only 13%) of the developments examined in the article provided the minimum open space that my publications consistently define as the threshold for a conservation subdivision (50% of the buildable land, plus all of the undevelopable wetlands, floodplains, and steep slopes). That standard is increasingly used, and has been adopted in model ordinances prepared for the states of Pennsylvania, Massachusetts, Rhode Island, New Hampshire, and North Carolina, which are handy on-line resources.

Three quarters of the 20 low-density rural subdivisions (served by septic systems) that were examined in the article preserved less open space than the Southeastern Wisconsin Regional Planning Commission (SEWRPC) requires in its model ordinance “rural clustering” (the term SEWRPC generally uses to describe conservation subdivisions), which is 60% of the gross tract area. Regarding the sewered developments built at higher densities, 14of these more suburban examples failed to meet the agency’s suggested minimum open space standard of 40%. The upshot of this is that less than half of the study’s 54 developments meet the minimum open space standard recommended by the agency, either in terms of rural clustering or suburban sewered developments.

In response to my request for an explanation, the author replied (in an email dated 1.12.14) that the study was based on developments the regional agency “considered, promoted, and implemented as conservation subdivisions.” However, when I asked senior staff at the agency if this characterization was correct, they informed me that it was not (email from Nancy Anderson, 1.17.14). Subsequent conversations by this author with senior agency staff have revealed that the table in question had been erroneously labeled, and that this error has since been corrected. The agency is now careful to describe subdivisions with less than 60% protected land as “open space developments”—a broader and more accurate term—and not as conservation subdivisions. The nomenclature error is doubly surprising because the agency has, for nearly 20 years, consistently referred to low-density rural subdivisions with substantial (60%) open space as “rural clustering” and not as conservation subdivisions.

Despite the wording used in table headings, the majority of the 54 developments examined by the study fail to meet the minimum open space standard for conservation subdivisions as contained in my publications, which the author cited many times. Nor do those developments measure up to the regional agency’s open space standards for rural clustering or its recommendations for suburban sewered development.

Because the study sample included so many examples of old-style clusters and PUDs, it does not provide a valid basis for drawing conclusions with respect to the environmental merits of conservation subdivisions. Its rich mixture of different development types led the author to incorrectly compare the less-impressive environmental results produced by higher-density sewered developments with the greater benefits reported in my publications as being characteristic of low-density rural conservation subdivisions. Given the nature of the data set used, a more accurate title for the paper would have been “Assessing the Environmental Merits of Open Space Developments.”

Although these incongruities do not invalidate the paper, they serve to greatly weaken its findings and conclusions because they were based on many higher density developments with modest open space ratios, instead of lower-density rural conservation subdivisions with significant open space. However, even with the broad mixture of various flexible development types, which combined sewered with unsewered subdivisions characterized by vastly different open space ratios, the article’s conservation findings are not unimpressive. Due to the higher percentage of conservation land in some of the newer, better examples, the overall average percentage of open space, including constrained lands, was 50%. (Because constrained lands are already protected by other kinds of regulations, they are specifically excluded from the minimum open space requirements for conservation subdivisions in my books.) Interestingly, flexible design in the polyglot mix of the 54 developments outperformed conventional subdivisions by reducing the platting of environmental corridor land from 76% to just 13%; high-value wildlife habitat loss declined from 80% to only 4%. The connectivity analysis found that, of the roughly 2,500 acres of land protected as common open space in the 54 flexible developments, more than 700 acres adjoin both environmental corridors and wildlife habitats. Furthermore, high percentages of common land bordering environmental corridors and wildlife habitats consist of contiguous woodlands or naturally vegetated lands (as opposed to lawns or turf, having less environmental value). For the corridors the figure is 48%; for habitats it’s 61%

Regarding benefits to water quality, the researcher was unable to measure the infiltration/recharge advantages of leaving half the land uncleared, ungraded, and uncompacted, and therefore much better able to absorb stormwater, another huge improvement over conventional platting. This significant difference is the key factor here, rather than the simple and easily calculated percentage of impervious cover. The relevant bottom-line is how the runoff is handled and absorbed on-site, not how much runoff is generated.

Despite its basic shortcomings, the article did provide several good recommendations, such as boosting the emphasis on designing subdivisions to avoid and preserve special environmental resources, including wildlife habitat and travel corridors. To achieve this emphasis, development plans should be designed more compactly with shorter streets so that resources become less fragmented. A second good recommendation is to shape the open space in every subdivision with respect to a community-wide map of potential conservation areas, providing clear guidance for coordinating conservation efforts. A third recommendation concerns open space management, observing that where ordinances specify how common land should be maintained (e.g., prairie restoration, farming, no clear cutting), “ the proportion maintained as mown grass was significantly lower than in jurisdictions where local ordinances did not have such specifications.”

As the design field evolves, hopefully more communities, designers, and developers will move up from clustering and PRDs to achieve better results with conservation design, implemented according to area-wide open space plans to preserve interconnected conservation networks.

The Leaning Tower of Dallas Is Too Good for This World

Opinion: Climate Change Has Brought the 'Era of Extreme' to the Great Lakes