Move over XBox; step aside Playstation.  The height of game-playing action is free and it's online.  The new game in town is University of Minnesota, Intelligent Transportation Systems Institute's "Gridlock Buster".  Test your mettle on the increasing levels of difficulty in processing vehicular traffic through a network of intersections.

Move over XBox; step aside Playstation.  The height of game-playing action is free and it's online.  The new game in town is University of Minnesota, Intelligent Transportation Systems Institute's "Gridlock Buster".  Test your mettle on the increasing levels of difficulty in processing vehicular traffic through a network of intersections.  As you begin at the bottom rungs of a city traffic department, you're encouraged and coached by a senior traffic group member to take on more challenging conditions as you climb the bureaucratic ladder.  If on your watch honking cars max out the so-called frustration meter, you lose your tenure in the city's traffic group and it's back to the mailroom for you.  Manage the downtown grid's peak traffic successfully and, eh, well, I didn't exactly get that far.  As a matter of fact, my home's proverbial Mayor (that's my wife) was not happy with all the horn honking resulting from my mediocre efforts, and I was forced to submit my resignation (I did try to appeal to her that it should be expected for communities to have a negative initial reaction to changes in signal timings, but she wasn't willing to put up with the grumblings).  But look, every public meeting I attend at least one person insists I don't understand their traffic as well as they do (which is usually true), so why shouldn't it be true in Gridlock Buster's fictional Metro too? 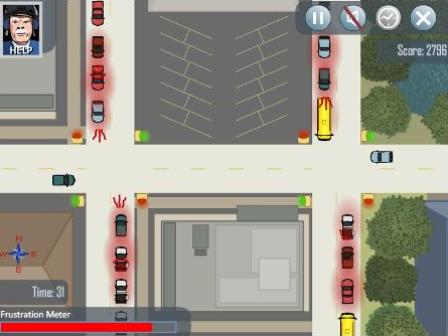 Note the mute is on since The Mayor insisted I get a handle on the racket!


Regardless, this game is sure to pique the traffic engineering geek in you and offers a chance at aspiring to the dubious rank of the new Gridlock Demagogue.  At the very least, you may come to realize via this game that the modern solution to solving congestion hasn't much to do with answering old-school gridlock gripes.  Instead, I have to agree with Sarah Goodyear in her Streetsblog post today that, despite the subtle implications here that there's more to solving congestion than merely futzing with signals, all the modern-day progressive solutions to solving urban congestion are regrettably absent from Gridlock Buster.  I was hoping to get the chance to insert a bike lane, assign a Bus Rapid Transit corridor, prescribe a road diet, or maybe even introduce a roundabout.  And what about the advanced levels including pedestrian crossings?  Search the web as I might, I just couldn't find any of the following cheat codes: BKLANE, BRT, TRFFCLMNG, RNDABT, MXDUSE, PEDPRORTY.  Despite these shortcomings, Gridlock Buster is a fun diversion and a great way to introduce younger engineers to the basics of network traffic management.  Perhaps Version 2.0 of UMITSI's Gridlock Buster will include transportation demand measures as "assessment options" after each level.  In the meantime, try to keep your frustration meter level down low this weekend, and fulfill your lifelong dream at being a traffic engineer!

Transportation readers who prefer reading a less auto-centric perspective of issues will see losses this year, as budgetary constraints at Streetsblog caused the layoff of Tanya Snyder of Streetsblog USA and the temporary loss of Streetsblog Chicago.

When I read the subtitle to the recent GHSA bike safety report, "Adult Males and Urban Environments Now Represent Bulk of Deaths," I took an interest as I fit that demographic. I was surprised to read here about the dispute that erupted from it.

The Streets Have Spoken: 2013 Streetsies Awarded

Streetsblog has announced the winners of its annual readers' poll on the year's best in sustainable transportation and livable communities.