I knew it was going to be a madhouse in downtown L.A. for Michael Jacksons memorial service, but I had to go see what it was like for the urban novelty of a huge swath of downtown closed off for thousands of fans and mourners.

I couldn't resist. I knew it was going to be a madhouse in downtown L.A. for Michael Jackson's memorial service, but I had to go see what it was like -- not because I'm a super fan, but purely for the urban novelty of a huge swath of downtown closed off for thousands of fans and mourners.

But what really struck me as I was wandering around amongst the masses was the huge percentage of them that were neither fans nor mourners. Lined along the sidewalks leading to the memorial's venue were dozens of vendors, selling everything you could think of with Michael Jackson's name or face pasted on. From buttons to t-shirts to hand-painted portraits, the informal economy was booming down at MJ Central.

In this video of the sidewalk leading up to the venue, vendors are selling everything from posters to stickers to tickets into the memorial service itself.

I don't want to blow things out of proportion, but for a lot of people, this event was kind of a big deal. You can read all about the excitement and anticipation for the memorial all over the mainstream press, but one point I think is worth re-stating here is that this was an incredibly unique event for any city. And the city treated it that way.

The (not incredibly coherent) map below shows the streets closed or affected by the memorial, and you can see it's no small footprint. 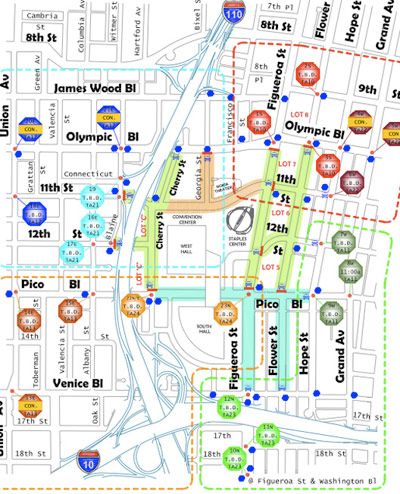 Thousands of people attended, both with tickets and without, jamming streets and sidewalks. Despite the peculiarity, this was a very urban moment for an otherwise underutilized downtown area.

And the city's informal economy responded as expected. I saw dozens, but there very well could have been hundreds of people selling memorabilia, food, water, and probably a whole lot of single silver gloves. 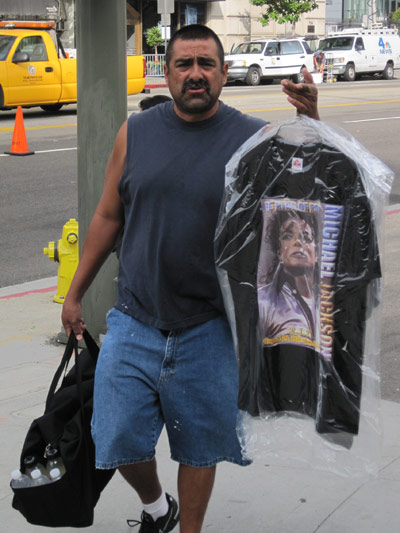 It might seem tacky or disrespectful to turn a funeral into a money-making opportunity, but I guess that's how business works. However you want to lay your moral judgment on these vendors, I think they offer an important example of something cities should start to think harder about. Street vending is a vital part of any active urban area, and while it would seem to be a response to vibrant places, I think it also plays a big role in making places vibrant. 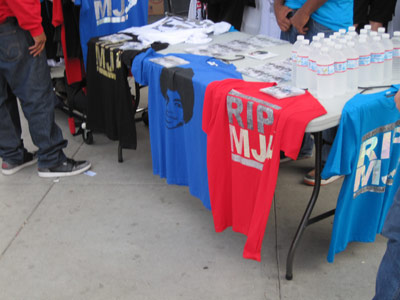 People like to interact, people need things, and -- especially right now -- people need jobs. Making it easier for people to legitimately utilize the public-ness of streets and sidewalks for commerce would be an easy way to create those needed jobs, serve the wants and needs of consumers and create some much-needed interaction in areas that are increasingly devoid of people.

So, sell on, Michael Jackson t-shirt vendors. Fill that niche and provide all you can. You may not be curing the economy, but you're at least offering a glimpse of how local, informal businesses can contribute in a not-unpositive way to the character and vibrancy of cities.

Another Call for the Legalization of Los Angeles Street Vendors