Should the Internet Replace Newspapers for Public Notices?

<p> In thousands of planning and zoning laws across the nation, official announcements are required to be published in the local newspaper of &quot;<strong>general circulation</strong>.&quot; In an era of newspaper decline and expanding diversity of media, are these laws becoming obsolete? Furthermore, should we be concerned with newspapers at all if a newer, more universally accessible medium is available: the Internet? </p> <p> A variety of announcements are legally required to be published in a local periodical of &quot;general circulation,&quot; sometimes in addition to being published in an official government gazette. The practice entered the planning world through the U.S. Department of Commerce&#39;s highly influential <a href="http://www.planning.org/growingsmart/enablingacts.htm">standard zoning and planning enabling acts</a>.

In thousands of planning and zoning laws across the nation, official announcements are required to be published in the local newspaper of "general circulation." In an era of newspaper decline and expanding diversity of media, are these laws becoming obsolete? Furthermore, should we be concerned with newspapers at all if a newer, more universally accessible medium is available: the Internet?

A variety of announcements are legally required to be published in a local periodical of "general circulation," sometimes in addition to being published in an official government gazette. The practice entered the planning world through the U.S. Department of Commerce's highly influential standard zoning and planning enabling acts.

The standard zoning act required any zoning amendment be heard before a public meeting, and "at least 15 days' notice of the time and place of such hearing shall be published in an official paper, or a paper of general circulation, in such municipality." The planning act's language was similar, requiring before a new plan could be adopted a "notice of the time and place of which shall be given by one publication in a newspaper of general circulation in the municipality and in the official gazette, if any, of the municipality." 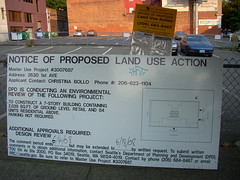 Published in 1926 and 1928, these acts influenced subsequent state laws across the nation. State and local laws often take a number of additional approaches to ensure the public has a reasonable opportunity to be heard in these proceedings. They include physical signs (such as this one from Seattle), notices posted on a prominent spot at city hall, or mailings to adjoining or other property owners.

However, among these, the requirement to publish in a newspaper is unique in its reach. Regular citizens may not pass by every property or even visit city hall, but many will subscribe to the newspaper. Historically the term "general circulation" has evaded close definition, perhaps since in most communities tradition has established what local paper qualifies - usually a general daily or weekly. Citing two cases, an Indiana state legal memorandum defined the term as referring to papers with a diversity of subscribers, not simply a high circulation.

This means that although many newspapers are suffering declining relevance and circulation, their status as general circulation publications is not in danger so far as the law is concerned. However, I propose a new approach to public notice: the Internet. The Internet is available at any time and place there is a connection. Access in public schools and libraries is nearly universal. Additionally, it has fast become the resource of first resort for a wide variety of citizens. Although not every citizen may have access to the Internet, I have argued before that putting information on the web can raise the general level of awareness by improving the knowledge of journalists, activists, civic leaders, and others who are engaged in disseminating information.

Although many governments do a good job making information available, the quality is unfortunately uneven and many communities do not post information in a timely way. (In June I discussed this fact in the context of a related argument governments should focus on providing data only.) Requiring online notices in addition to or in the place of newspaper ads through a state law will ensure uniformity, and harness new technology to capture the intent of our existing planning and zoning laws in a changing world.

After Month of Hearings, D.C. Still Not Ready to Vote on Zoning Rewrite

After five years of work, D.C.'s Zoning Commission is not quite ready to consider changes to the city's 55-year-old zoning code. Additional public hearings have been scheduled after some groups asked for additional outreach.

Chris Haller parses the data in a recent report on Internet use for implications for how communities should manage their public outreach strategies.

A survey shows that 2/3rds of Houston residents are ready for stricter land use regulations. This follows a number of high-profile clashes between neighborhoods and developers who want to build in them.