WARSAW, Poland --I'm on my fourth city in a two-month excursion, and so far I've found all the quaintness, density, pedestrian life, and vernacular architecture that I was looking for as an antitode to my beloved, loathed Los Angeles. The cores of Riga and Vilnius come right out of proverbial fairy tales, and even Helsinki, though historically torn between Sweden and Russia, has plenty of the best trappings of Boston and San Francisco (as well as some of the worst of Atlanta or Dallas; more on that later).

WARSAW, Poland --I'm on my fourth city in a two-month excursion, and so far I've found all the quaintness, density, pedestrian life, and vernacular architecture that I was looking for as an antitode to my beloved, loathed Los Angeles. The cores of Riga and Vilnius come right out of proverbial fairy tales, and even Helsinki, though historically torn between Sweden and Russia, has plenty of the best trappings of Boston and San Francisco (as well as some of the worst of Atlanta or Dallas; more on that later).

Like all the great cities of Europe, Warsaw expanded from a small town, which was walled in and described by narrow cobbled streets and the ubiquitous four-to-five-story buildings, whose dimensions, to my mind, please the eye and spirit more so than any squat ranch house or soaring tower. A typical European town square with beer gardens, fountains, and street performers sits at the center of Old Town Warsaw, and there tourists and locals alike find refuge from the city's brutal history and similarly sad modern architecture. In contrast with the mega-boulevards and superblocks of the city at large, Old Town puts Warsaw in league with any number of its fellow Continental cities. Except, Old Town Warsaw isn't real. 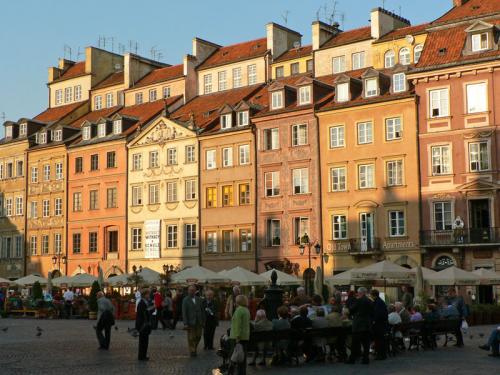 Warsaw reminds us that history can happen in a flash, not just through slow decay.  Thanks to the handiwork of the Luftwaffe, by 1944 Old Town comprised the a particularly large heap of rubble in a city that had become its own landfill. Photos show jagged outlines of former buildings with the fragments of their ruins strewn about the streets. Historic perservation--some paint here, a new sash there--was hardly an option. Somehow, though, while the Soviets were gleefully realizing modernism at its grandest scale, the leaders of what remained of Poland resolved to rebuild Old Town exactly as it had been. From photos,street plans, and astounding reverence for the past, Old Town re-emerged like a grand, authentic version of something that Americans know largely as The Grove or Universal Citywalk. What history took hundreds of years to cobble together, the communist infrastructure machine accomplished in a few decades. It makes for an unsettling, to to say confusing, series of "before," "after," and yet again "after" photos.

[Note: I lament that I do not yet have my own present-day photos; I'll post them once I get a chance to upload them from my camera.] 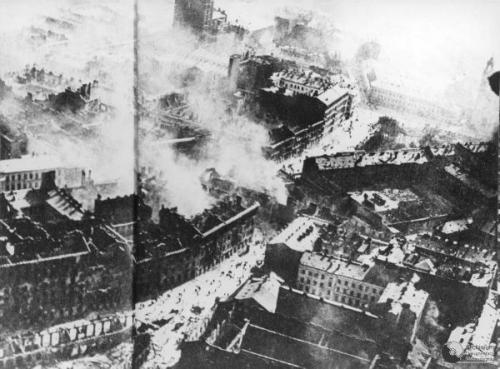 The re-creation was so thorough that in 1980 the United Nations Education, Cultural, and Scientific Organization (UNCESCO) besotwed upon Old Town its vaunted designation of "World Heritage Site." But this honor, and the glee with which tourists romp in Old Town, questions the very heart of what it means to be "historic."

Surely age alone has ever qualified something as historic, yet the new Old Town suggests that an historical signifier doesn't even have to be old per se. Perhaps because the original is gone and beacuse the design, layout, and location mimics the original--indeed, only the materials are new--perhaps new, simulated Old Town deserves to carries on the aura of the original and therefore has co-opted the esteem that the latter would have garnered had it surived the past 60 years. Old Town is, then, neither an anachronism nor a cultural oddity--it is the right thing in the right place; far more right, in fact, than the aforementioned communist superblocks, which have nothing to do with Poland or culture and everything to do with oppression and the appearance of efficiency.

A culture that chooses to demolish its landmarks, such as those which bulldozed Chavez Ravine and Penn Station, creates its own history as it destroys; that is, destruction becomes part of its culture. New Penn Station is an authentic, if horrid, evolution that purposefully rejected the old Penn Station because New York chose to build it of its own free will. New Penn Station is as much an historical artifact as the old one. So be it. The destruction of Old Town, by constrast, was not a Polish act. Therefore, anything else that would have replaced Old Town would not have been Polish either.

Old Town's authenticity, rightly or wrongly, lies not in its architecture but rather in its circumstances. It is a lamentation of the destruction that was foisted upon it as superpowers collided. Warsaw did not choose to stand in harm's way, and the recreation of Old Town is merely a way of trying to set things right, but it does not try to fool anyone. Indeed, the mantra "never forget" rings loudly through its narrow streets. Tellingly, and admirably, the new buildings of Old Town bear the dates of their construction, so that buildings straight out of Renaissance times bear atomic-age dates.

In an age dedicated to all things new, new Old Town rejects innovation. It refutes the axiom that creativity must include novelty lest it devolve into mimicry, and any unease about Old Town might stem from its complete lack of creativity, more akin to a Middle School history project than to great urban architecture. Yet, it is quite possible than by the 1950s the people of Warsaw had had quite enough of the new. They may have realized that creativity for its own sake make no more sense than destruction for its own sake.

On the flip side of creativity, what does Old Town Warsaw mean for the poor preservation architect and his or her band of artisans, painstakingly removing layers of paint and drilling into rotted timbers? Old Town might imply that, especially when preservation often costs more than new construction, they should start with dynamite and give in to postmodernism. But this won't do either. In either case, history matters far more than form. For the preservationist, the usual challenge is to work with history, not against it. But sometimes, the footfalls of time leave all too little to work with.

While the New Urbanists take their lumps for trying to manufacture a new version of history and the Disneys weather even harsher, and more deserved, criticism, Old Town Warsaw's combination of architectural and historical honesty serve as a tangible (if, perhaps, impermanent) reminder not only of the carnage but also of the ability to rebuild, recreate, and one day enjoy another beer under a clear sky.