Last week I attended the Society of American City and Regional Planning History (SACRPH) conference in Portland, Maine. The conference attracted a variety of notable planners and historians to my hometown for sessions on everything from radical 1970s public participation exercises to best practices in waterfront planning.

At the conference, outgoing group president and historian Greg Hise gave a provocative lecture titled “Whither the Region, or Why Ought There to Be an ‘R’ in SACRPH?” In the talk he described how he believed there was a declining interest in the organization in studying regions, pointing out that the word was declining in use in the titles of papers presented at recent conferences.

After the dramatic collapse of the Minneapolis freeway bridge last week, the collective hand-wringing began. The bridge was known to be faulty, but had not been replaced. Our entire public transit system is underfunded, we were told.

In addition to transportation infrastructure, those concerned with urban issues have a litany of complaints about American cities. Our transit systems are not adequately linked to zoning laws. Our high parking requirements doom alternative modes of transit and drive up development costs. Our policies encourage uncontrolled sprawl, which seemingly nobody likes. Planners' recommendations are too often overruled by ill-informed and politicized zoning boards. Our buildings aren't energy efficient. City mayors and councils play politics with projects painstakingly approved through highly democratic review processes. And nobody's happy when local activists hold undue power over individual projects.

The solutions we are given are almost as varied as the problems. More centralized planning is often called for, or perhaps more regional planning. However, this seems highly difficult and unlikely in most places where land use is regulated by many small municipalities. Some suggest the solution is more public input on infrastructure and private projects to enhance their quality, while others think we need less input to speed them along and reduce the costs incurred by delays. Some are convinced elaborate flexible or form-based zoning holds the key to better cities, although implementation seems frustratingly difficult. Some cynics conclude that perhaps it is American cultural biases that produce our flawed cities: maybe Americans just like it this way, living with decaying infrastructure, long commutes, but low taxes.

The motley list of solutions almost never includes the one thing that actually has overcome the myriad of obstacles to good city building before: a broad-based and robust conversation to create solutions, money, and political support.

I recently discovered the Greek urban planner Constantinos Doxiadis (1913-1975) through a biographical sketch by Ray Bromley in a collection of essays. An energetic polymath, Doxiadis launched his career overseeing postwar reconstruction in Greece after WWII. Through involvement in the United Nations he developed an extensive international network of contacts concerned with urban development.

Planners regret them, neighbors dislike them, and they gobble up valuable real estate in the center city. The downtown expressway is a much-disliked reality in most American cities. Now's the time to do something about them.

In the last few years, a set of interactive, web-based technologies has reinvented the web. Myspace, Meetup, Wikipedia, Youtube have become household words, and millions of people worldwide are surfing social networking websites, writing blogs, and collaborating online in new ways. These so-called "Web 2.0" technologies were the inspiration for TIME's person of the year: You. What the true impact of these technologies will be, we must conceded it is, as TIME says, "a massive social experiment."

As a note of introduction, I am a Master's student in Community Planning at the University of Maryland. I'm happy to be part of this exciting project. 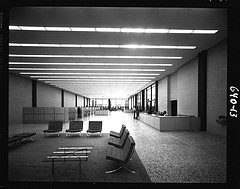 With a series of new urban libraries opening in U.S. cities recent years, its been said we're living through an 'urban library renaissance.' Whether it is the enthusiastic reception of the new Seattle library, or lending and attendance up in urban Canadian libraries, there seems to be an increased awareness of the critical role libraries play, even in the information age.

However, no such renaissance has happened here in Washington, D.C. -- at least not yet. Here the former mayor's plans to build a new library were stalled by what the Washington Post has termed the 'Mies Mystique.'